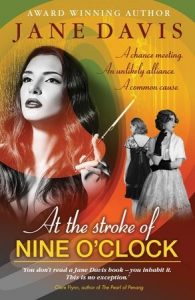 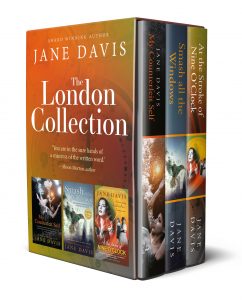 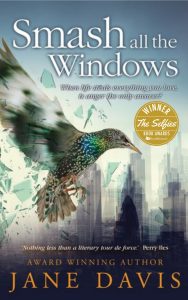 At the Stroke of Nine O’Clock, the ninth novel from Jane Davis was shortlisted for The Selfies Book Awards 2020.

‘You don’t read a Jane Davis book – you inhabit it. At the Stroke of Nine O’clock is no exception.’ ~ Clare Flynn, author of The Pearl of Penang

“Why do I feel an affinity with Ruth Ellis? I know how certain facts can be presented in such a way that there is no way to defend yourself. Not without hurting those you love.”

”It’s a feminist treatise against men. It’s a battle in the class war against noblesse oblige and inbred rights. It’s a plea for the understanding of women everywhere. It’s all of these things and more.’ ~ Perry Iles

Grace Masso, writing for Readers’ Favorite:
‘At the Stroke of Nine O’Clock by Jane Davis is a pulse-pounding historical novel that follows three women against the backdrop of post-war London as they struggle to create a life for themselves. It is set in 1949 and introduces readers to Caroline Wilby, a working-class girl who is willing to grab any opportunity to make money to support her family; Ursula Delancy, a silver screen star who has just returned from the USA after a failed romantic adventure; and Patrice Hawtree, a wealthy, beautiful, and childless woman trapped in an unhappy marriage and dealing with an addicted husband. Eventually, these women will meet at a local club, thanks to the sensational Ruth Ellis case — Ruth Ellis is sentenced to death by hanging for the murder of her abusive boyfriend. This time around, Caroline, Ursula, and Patrice will not watch in silence.
This is a well-crafted story that brilliantly depicts the place of women in post-war England and the injustices they suffered. Readers are introduced to compelling women who struggle to survive in a world dominated by men. The novel is cleverly plotted and the lives of the four women are written in a suspenseful manner, with strong themes coming out clearly as one follows the characters — women’s rights, capital punishment, marriage, and social injustice. The characters are richly developed, each of them a reflection of the world they are born into; each of them has experienced the pain of broken promises and lost dreams. The setting in post-war London is well-written, with historical and cultural elements skilfully articulated. At the Stroke of Nine O’Clock features a real-life character — Ruth Ellis — and a historical world that readers will be excited to explore.’

This is the first time I have come across this author, and what a revelation! She writes stunning prose that keeps the pages turning. She understands her women, their faults, and the way they pull together when the chips are down. Some succeed, but too many, like poor Ruth Ellis, fall between the cracks. In this telling, the reader feels that not only should Ruth not have been hanged, but she should never have been found guilty. Highly recommended. Read full review.

Please see the sidebar (Available at These Locations) or use the Universal Code and select your preferred store.

Want to save money? At the Stroke of Nine O’Clock is also included in the value box set, The London Collection.

Just click on the Preview button below the image.

In Conversation with JJ Marsh, author of the Beatrice Stubbs series.

For more interviews, visit my archive of news and reviews. 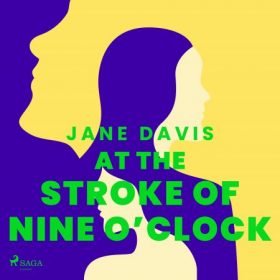 At the Stroke of Nine O’Clock is now available as an audiobook from Saga Egmont, with narration by Bea Holland.