Still in Shock, On Nathan Filer’s The Shock of the Fall 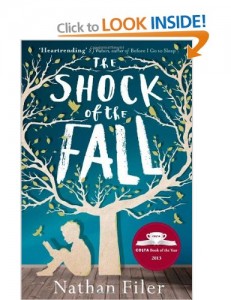 Many of you will know that I am interested in cover design. Today, a review I posted on Amazon has invited more comments that anything else I have posted of late, and so I thought I would share it.
‘Amazon customers have occasionally commented ‘that is not a review’ when I have posted my thoughts about a book, but seeing as this book already has 770 ‘proper’ reviews, I feel justified in explaining to you how it has made me feel rather than tell you what you can expect. I should mention that I have just wept throughout the last few chapters and had to sit very still for a while afterwards before attempting to have a shower, but have found that it is impossible to carry on with the everyday things before getting my thoughts down.
You may base your decision of whether to buy this book on the cover. Personally, I am very angry about the cover. It will not tell you that you are buying something edgy. (The author read Iain Banks’ Wasp Factory and Mark Haddon’s Curious Incident while he was writing this. Check out their covers for a good indication of whether you will like this novel.) As an author who has been presented with a cover that had nothing to do with my story, and been told ‘but it’s a great cover,’ I think that it is both lazy design and disrespectful to the author. It is quite obvious that the designer hasn’t read the book. Instead, they have taken the trend of brown-paper and cute imagery that has been with us since ‘When God was a Rabbit’. This is not a suitable book for a cutesy cover. The Shock of the Fall is a deceptively simple novel, which addresses complex issues: guilt, grief, mental health and the implications of failing to communicate. It is also edgy and raw and it will leave you stunned. 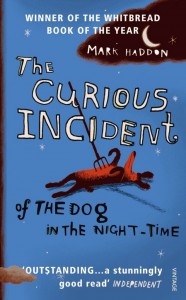 It makes me especially angry as Nathan Filer spoon-fed his publishers lots of great material to work with. He really couldn’t have done any more. Here are just some of the gifts he gave the marketing team:
An older brother who could not behave like an older brother because he has Down Syndrome.
The frustration of the younger brother who has to constantly act like an older brother.
A brother with a beautiful moon-shaped face.
A chance meeting with a girl who was having a funeral for her doll. (The yellow coat with the black belt was a fairly strong image.)
A tragic accident for which various parties blame themselves, but, because no one talks about the accident, each party takes on the full weight of that blame. (This happened at a seaside caravan park, on a steep path leading down a cliff face, and we only know there were trees at all because there were roots that were tripped over.)
A boy who is a victim of his parents’, but mostly his mother’s, grief.
A mother who needs her surviving son to be ill so that she can protect him and make sure nothing bad happens to him.
A mother who demands a diagnosis for her son until she gets that diagnosis. (And yes, there were mental health issues in the family, but the reader is left with the impression that these might have been overcome.)
A mother who takes her son out of school and removes him from his support network.
A father who supposedly allows these things to happen.
A young man who learns that we may all be made up of the same atoms and that atoms are effectively recycled, so that we may be made up of the same atoms as people who have lived before us.
A young man who has a wonderful relationship with his Nanny Noo.
A young man who is bored beyond measure with the monotony of being a mental health patient, resists treatment, and yet know that he needs it. (Or know that his parents need him to need it. We are never quite sure.)
A young man who tries to make sense of his world by drawing, creating models and writing about it. (The typewriter Nanny Noo buys him would have been a great image. The ant farm he builds for his brother. The ant-infested carpet in his council flat. By all means, knock yourselves out and give it a brown-paper background if you wish. Just make it a bit edgy. Try to make it relevant. Please.)
Two young people sitting in the rain on an upturned boat on the beach where the accident happened.
How our stories overlap with other people’s stories, but how we have no control over what we remember.
It is no real surprise to me that this won the Costa Book Award. And, of course, a cover that isn’t representative of content may pull in readers who would not otherwise read a book that should be widely read (although I think it is also the reason this book has some 1 and 2 star reviews from readers who like a happy ending). But the fact that it is a great cover does not mean it should be on this book.
At no point in the novel is there a small boy reading under a tree with lots of gold embossed birds in it.
PS: Did I mention that I quite like the lettering?’