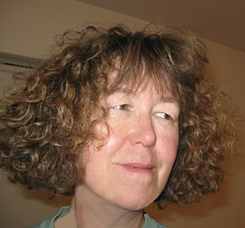 Today, I’m delighted to welcome Ellie Stevenson to Virtual Book Club, an interview series in which I put questions to authors about the books they would like to persuade your club to read. If you want to pose a question of your own, you’ll have the opportunity to do so at the end.

Q: Ellie, if you were trying to describe your writing to someone who hasn’t read anything by you before, what would you say?

My novels tend to shift between the past (Victorian/Edwardian) and the present and have a mystical/supernatural twist. Shadows of the Lost Child includes a time travel element and a ghost story.

Q: And that’s the book we’ll be discussing today. Your protagonist is a boy called Tom. What five words best describe him?

Sharp – Tom has limited book learning as he lives in the late nineteenth century but he’s as bright as a button.

Plucky and resourceful – Tom lives in a poor part of town but gets by as best as he can.

Cheeky – Tom gets away with whatever he can, to make his life bearable, but he has a warm heart.

Loyal – he is loyal to his friends, and even to his family who he doesn’t like much.

Wary – Tom has had a difficult life so far in a poverty-stricken area, so when he meets someone who isn’t what she seems (a girl called Alice), he’s entranced but cautious. He doesn’t believe in miracles, just in resourcefulness. Alice is from the future (present day England) but Tom doesn’t know this.

Shadows is set in a fictional town called Curdizan, which is based on historic York (UK). The story is set in Curdizan High and Curdizan Low, which are loosely based on two areas of York called Bedern and Hungate. Hungate has since been demolished and rebuilt but, in the nineteenth century, it used to be an area of terraced housing and small shops and pubs, with a strong community element. People struggled with debt, health issues and tough living conditions.

Bedern (Curdizan High) was improved in the 1980s, but at the time the book was set (late nineteenth century) it was an area of migrants, poverty and prostitution, and therefore less respectable than Hungate. Tom lives in Curdizan Low but visits Curdizan High to go to a ragged school for poor children and also to look for his friend Louise who lives in a tenement there, but goes missing. 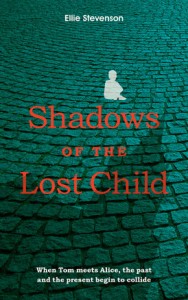 “An intriguing novel, a mixture of ghosts and time travel. The twists and turns of the plot kept me guessing until the very end.” Amazon reviewer

Q: Was your novel inspired by any real life events?

Not as such, more by the location – place has always been very important to me, and I was staying in York while I undertook the initial research for the book. The stories of the real life people of Bedern, Hungate and early twentieth century York acted as inspiration. So, for example, Louise lived in the tenements which were especially grim and real life people would put furniture and rugs out on the landings to have more space (often whole families would live in one or two rooms).

Q: You’ve clearly researched your location. Tell us a little about other areas you had to investigate.

What life would have been like in Victorian/Edwardian times. So, for example, I researched the railways and Rowntree’s, the two main industries of the city at the time. Miranda, a friend of Tom’s, whose mother runs a pub called the Keepsake Arms, works by day in the local sweet factory.

For the contemporary parts of the novel I researched selective mutism (Alice won’t speak to her mother), reverse speech (Aleph, a counsellor helps people identify hidden meanings in what they say) and one other area which I can’t mention as it would spoil the story!

Q: How important do you think historical accuracy is when writing fiction and how faithfully does your novel stick to the written record?

I research the historical aspects of my novels thoroughly and try to recreate these aspects faithfully where I can. Having said that, the beauty of a novel is that it is fiction and there is always scope for development. So, for example, in Shadows, the streets, though fictional, in many ways follow the path of the real streets that once went between Hungate and Bedern, but one of the passages has mysteriously become a time tunnel!

I love researching the past but didn’t want to write completely historical fiction. Swapping between the past and the present allows me (and my readers) to live in more than one world, and I enjoy creating a connection between these different worlds. The supernatural element is a great device for creating mystery and connecting the worlds.

Because York has always been a special place for me, writing the novel cemented that feeling and allowed me to feel a connection with local people of the past. I learned some fascinating facts about life back then. At the local ragged school, for example, attendance increased on Sunday mornings when breakfast was provided. Parents went to bed late on Saturdays and didn’t want to get up early to provide breakfast on Sunday mornings!

Q: Do you find yourself returning to any recurring themes within your writing and, if so, are you any closer to finding an answer?

My recurring themes seem to be the Victorian/Edwardian era, mystery, ghosts and the supernatural. But as I’m only writing my third novel, we’ll have to see if these themes continue. 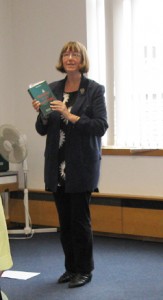 Q: How about your writing habits? Are you very disciplined? Do you work to a set word-count, for example?

When I’m writing I aim to write 1,500 to 2,000 words per day, and these are written fairly quickly (usually in around 2-3 hours), but the editing which comes after the first draft is much slower and encompasses several revisions.

Favourite: researching the historical aspects and writing the first draft.

Least favourite: editing the book for the nth time!

Q: Are there any books on writing that you find particularly useful and would recommend?

Want to know more about Ellie?