Did I mention that there might be the occasional rant? 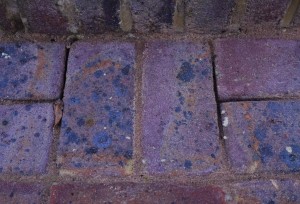 Let’s get this straight: I don’t have a lot of money, so I don’t like being ripped off. I don’t even like the feeling that someone might be ripping me off. So when I pay a builder  £7,000 for a job, I don’t expect to receive a bill for materials that he forgot to include in his ‘materials and labour’ quote.

The job involved building a front wall and laying a new path. There were various bits and pieces we weren’t too happy with during the laying of the path.

For example, on 5 January I emailed: ‘Looking at the path today, we have noticed that there are several bricks that are cracked the whole way across – two of them are on the triangular part at the end of the path that you are still laying and the other one is less noticeable, further up the path. Also, Matt asked me to mention the tarmac in front of the wall. It looks quite loose. Is there any way you could tidy it up?’ (People, when I said, quite loose, understand that I was being polite.) 30 March 2014: ‘When you pop round tomorrow, can you take another look at the front path. The sand doesn’t appear to be compacting or solidifying and is drifting both on the path and out onto the pavement. I must admit that I hadn’t envisaged that we would keep on needing to sweep it back into the cracks quite so regularly. Please can you advise if you think the brickwork is now dry enough to seal. Also you mentioned that you would look at ‘compacting’ the tarmac in front of the wall.’

But we accepted his assurances that all of our concerns would be dealt with in the ‘finishing off’.

Finally this week, after a wait of three an a half or months, the path was sealed.

Aside: Love the way he makes it sound as if he is working for nothing. We had already paid for his labour.

Call me old-fashioned, but I thought the whole point of the sealer was to STOP this from happening?

Naturally I queried this. ‘Thanks for your email. I have gone back through my emails and found this (below), when I was querying the suitability of brick pavers, so the sealer was under discussion from the beginning:

‘Hi Jane, No it will be fine, unless you have lots of foot traffic every day like a public foot path the brick face will were down. But yours will be fine, as I will seal it. Prevent frost and tread damage.’

His reply? ‘Labour for me to seal it was included in the job. But I didn’t put the actual price of the sealer on the quote as its a extra price but just for the material.’ 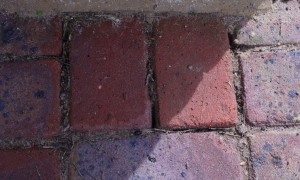 The grass cuttings have been nicely sealed in place as well.

Because I am British, I am not just allowed to reply, ‘Your problem’ , so I replied, ‘I must admit I had  assumed that everything we discussed was part of the price quoted, whichincluded both materials and labour. Perhaps you can get back to me.’

(Him) ‘Hi Jane, Just had another look in my notes. Sorry for the confusion, but I have got own in my note book : Cutting hedge : no charge, Labour sealing: no charge, just sealer to pay for.’

(Aside: Oh, well, if it’s in your notes… here, have all my money. Note the continued suggestion that we have not been charged for his time.)
So then I went to look at the work. Now I do accept that there has been some weather of the wet variety, combined of late with weather of the warm variety, which has been ideal for weed-growing in the sand that has stayed in the path. So they have all been sealed. As have grass clippings.

(Me) ‘I have taken a look at the path this morning and am concerned that the sealer has been applied before sand has been brushed back between the bricks.’ (Again, being very polite.) ‘There are some quite large areas where there is no sand. I was going to take photos tomorrow and send them over to you, but you have got there first.’

(Him) ‘Yes it does need some sand brushed in places, more where the rain comes off the roof at the entrance. The sealer has sealed beneath the sand and on top as it soaks in. This is why I mentioned we might have  to give it another sealer later. Have you still got my bank account details to send the money?’

(Me) Just a suggestion. Why the f****** hell didn’t you brush the sand in before you applied £70’s worth of sealer? No, I didn’t type this. What I typed was, ‘The bag of sand you left last time you were here is still in the garage. If we had realised you weren’t going to brush the sand in first, we would obviously have done this before you arrived. There is also a lot of sand and sand ‘drifts’ on the path which have now been sealed and need scrubbing off. As it is, £90 of sealer has been wasted and this will need removing and re-applying. Clearly the work will have to be re-done because it isn’t acceptable.’ 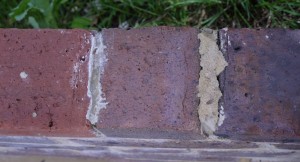