Author Interview: Alice Furse on the launch of her debut novel 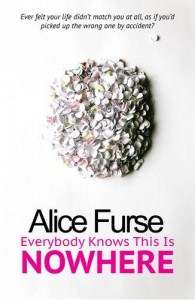 Not all routes to third-party publication are conventional, but the speed at which my guest Alice Furse was picked up is certainly unusual. I first came across Alice at last year’s London Author Fair. She had recently self-published her first novel, Everybody Knows This is Nowhere. Shortly afterwards she was approached by Burning Eye Books, who describe themselves as 21st Century Punk Publishing and whose main focus is poetry.

Alice studied English Literature and Creative Writing at The University of Kent, and was published in two anthologies for the best student work before completing an MA in The Contemporary Novel. She has worked in lots of places including a bitumen tape factory, a casino and a sports radio station and now lives in London. She has been published in Litro magazine and her first novel Everybody Knows This is Nowhere, is released on 10th October.

Reviews for Everybody Knows

‘An astonishingly accomplished debut novel from a writer whose name is going to be everywhere soon.’ Vanessa Jackson

‘Like a fly on the wall documentary, but in book form, and it’s excellently done.’ Amazon Customer

Q: There are some very flattering comments in your initial reviews, but what was your first success as an author?

I’ve recently become very interested in the idea of success. As I’m on the cusp of publishing my first novel, I’m still waiting to see and wondering how it’s supposed to be measured but in some ways having my novel taken on by a publisher was a success in itself.

There’s a great documentary film about a rock band called Anvil who toured with a lot of massive stadium bands back in the 80s like Guns n Roses and Motorhead, but they never really made a dime from it. There’s a great scene where one of the main band members, now in or near his fifties, is selling CDs from the back of his car and he tells the camera that he knows he’s a success because he’s still making music and putting albums out. There’s something in that.

Q: You have experience of both traditional and indie publishing. How do the two compare?

In terms of how I thought about my writing career, there’s no doubt that being traditionally published legitimised my efforts because essentially, getting a publishing deal meant that someone other than me thought what I’d written was worth taking a chance on. In more practical terms, it also meant that a lot of the legwork was shared so headaches about how on earth I was going to afford a copyeditor and getting physical copies printed dissolved and I could concentrate on things I was better at and liked more.

However, I’ve been very lucky because Burning Eye Books are a reasonably small press and I’ve been able to retain a lot of the control I had as a self-published writer while getting their expertise on distribution. I was talking to a writer friend the other day, and she’d just got her cover through from her publisher (one of the big five). She said it was nothing like how she envisioned, and even though we agreed that she had to trust the designers who do this for a living, she still hated it. Everybody Knows has the same cover as it did when it was self-published, which is an idea I came up with one weekend, and a photo that I took myself. It still feels like mine. And that makes me very proud. 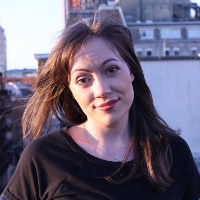 Q: How do you divide your time between writing and marketing?

Oh god, I’ve not figured out the balance between these two things at all yet. I have ideas about writing all the time but my heart and soul is going into marketing Everybody Knows, plus I have a full time job (and mates) so there just aren’t enough hours in the day for everything.

Recently I went through a stage of working on book stuff every evening until midnight, and then lying in bed and thinking about all the things I hadn’t managed to get done. I’ve trained myself out of that now. Someone told me the other day that I should be well stuck into a second book by now but I hate the word “should”. It’s not as if there’s a queue of people round the block waiting to read my thoughts. I’ll figure it out as I go along, just like everything else.

Q: Are you on any forums or networking sites? If so, how valuable do you find them?

I know it eats up time, but I get so much from Twitter. I never thought in a million years that I’d find friends on there but it’s a great way to see who knows who, especially when you’re trying to get into an industry like publishing, and you do get to know people. I’ve read so many interesting essays and found writers and journals and books that I’d never have otherwise come across. It’s like an advanced Google… With millions of One Direction fans (who you can happily ignore).

Facebook is a totally different animal. I used to like it but lately it makes me feel very sad for some reason… I can’t put my finger on exactly why. It’s not very real somehow, is it? Also, keeping an author page and a private page separate is so hard-going I’ve actually given up trying.

Q: Do you have pieces of work that you think will never see light of day?

Sure, who doesn’t?! I say that Everybody Knows This is Nowhere is my first novel but – I suspect in common with most writers – it’s just the first palatable one. Before that I wrote something about working in McDonald’s which was called Bug and came out somewhere between a novella and a novel.

It’s not absolutely terrible but I was learning mechanics: how to plot out two story strands, how to use theme, how to formulate and end chapters, how to tackle endings. I was obsessed with how corporations treat their workers and the effect that then has on society, and writing was an outlet for figuring out how I felt about it all – so in a funny way not all that different from Everybody Knows. 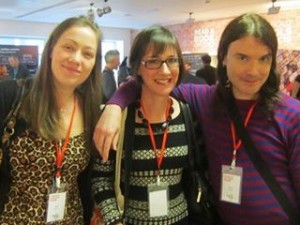 Q: Do you write your first draft on paper or do you prefer a computer?

I’ve always preferred a computer. In fact one of my first memories of writing is sitting at this ancient computer that my dad bought home when I was about eight – it was one of those ones with a black screen with bright green letters. I used to make up stories about what my toys said to each other when I left the room.

Q: Some writers like quiet, others the noise of a coffee shop or the rumble of a train. Do you listen to music or have noise around you when you write or, like me,  do you need absolute silence?

I was going to say I can’t write in silence, but that might just be because I’ve never really done it. I’ve spent most of my adult life living in house shares, so private space is just like this ultimate luxury fantasy to me. I love music and when I’m writing I have it loud on headphones, which is the closest I get to being in my own world.

Q: What’s your favourite/least favourite aspect of your writing life?

My favourite aspect of writing is when you’ve been working on something for a while and you have a bit of a breakthrough. So like getting halfway through a novel and two themes that you thought were separate actually start to match up, or a character says something you weren’t expecting but it’s revealing and poignant. That’s when all the thinking and working starts to pay off.

My least favourite aspect of writing is people asking, “What’s your book about?” which of course is a perfectly reasonable question (and also one that I ask whenever I meet a writer). The problem is, Everybody Knows is a literary novel and one of the main themes is boredom, so when I first started talking about it I felt like people were a bit unenthused with my answer. As I put more hours in on the marketing side, I gradually stopped tying myself up in knots about it, and now I just say something like, “It’s about a girl who works in an office and feels a bit frustrated about how life has turned out after thinking everything would turn out OK after finishing education. It’s got some funny bits in it too though.” It seems as good a description as any.

Q: What do you do when you’re not writing? Any hobbies or party tricks?

Ha – I’d love to put “I’m about to start training for a marathon” but I’ve been saying that for months and I haven’t done anything. I mainly drink red wine and try to read as much as I can.

Q: Are there any books on writing that you find useful and would recommend?

There are two that I came across when I was a student and still dip into occasionally. Number one is Bird by Bird by Anne Lamott which is funny, honest, encouraging and has lots of great tips in it to get you started. 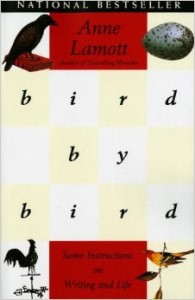 The second is On Writing by Stephen King which is in two parts, one of which chronicling his writing life, and the other full of great practical advice.

I’ve just thought of a third actually – Writing Down the Bones by Natalie Goldberg is very Zen but has tonnes of little exercises that are really good at getting the juices going if you’re just starting out or have a bit of a block.

My blog about the London literary scene is on Tumblr here

Here’s a piece I wrote for Authors Electric for indie authors: How to Find and Approach Journalists