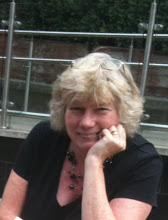 Today, I’m delighted to welcome Sue Barnard to my blog.  Sue was born in North Wales but has spent most of her life in and around Manchester. After graduating from Durham University, where she studied French and Italian, Sue got married then had a variety of office jobs before becoming a full-time parent. If she had her way, the phrase “non-working mother” would be banned from the English language.

Since then she has had a series of part-time jobs, including some work as a freelance copywriter. In parallel with this she took several courses in Creative Writing. Her writing achievements include winning the Writing Magazine New Subscribers Poetry Competition for 2013.

Sue has a mind which is sufficiently warped as to be capable of compiling questions for BBC Radio 4’s fiendishly difficult Round Britain Quiz. This once caused one of her sons to describe her as “professionally weird.” The label has stuck.

Sue joined the editorial team of Crooked Cat Publishing in 2013. Her first novel, The Ghostly Father (a new take on the traditional story of Romeo & Juliet) was officially released on St Valentine’s Day 2014, and her second novel, a romantic intrigue entitled Nice Girls Don’t, followed in July 2014.

When Sue isn’t writing, she enjoys travelling, reading, amateur dramatics, walking and gardening (she claims she’s had some of her best writing ideas when she’s been mowing the lawn).  She is also very interested in Family History. Her own background is stranger than fiction; she’d write a book about it if she thought anybody would believe her.

Sue lives in Cheshire with her husband and a large collection of unfinished scribblings.

Q: After winning the Man Booker prize, Richard Flanagan said that The Narrow Road to the Deep North was the book he couldn’t avoid writing. Does that ring true with you?

A: Yes; that was how I felt about writing The Ghostly Father.  Although I was writing it mainly for myself, it was a story which I felt I had to tell.

Q: The protagonist in your debut novel is Fra’ Lorenzo.  What five words best describe him?

Q: Where is The Ghostly Father set and how did you decide on its setting?

A: It’s set mainly in Verona, Italy.  As the plot centres around the story of Romeo & Juliet, this was pretty inevitable!

A: The play (obviously), but also life in a monastery.  And since Fra’ Lorenzo is a herbalist, I also had to study some herblore. 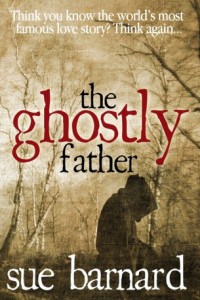 Juliet Roberts is asked by her grandfather to translate an old manuscript from Italian to English for his birthday. The story manages to exceed all Juliet’s expectations, as it turns out to be the actual story of Romeo and Juliet, made famous by playwright William Shakespeare. The story of Romeo and Giulietta, told from the point of view of a monk named Lorenzo who experienced it all up close and personal, continues to surprises Juliet with every page and she can’t help but wonder whether this might be the actual story of what happened between these famous starcross’d lovers…

Look inside or buy The Ghostly Father

A: Very early on.  It’s based on a quotation from the play; it’s how Romeo addresses the Friar.

A: As The Ghostly Father is based on an existing story, most of the characters’ names were already in place – although where appropriate I gave them their Italian equivalents.  Thus, Friar Lawrence becomes Fra’ Lorenzo, Juliet becomes Giulietta, and the Montagues and Capulets become the Montecchi and the Capuleti.  Where I’ve introduced characters who don’t appear in the Shakespeare version, I’ve chosen names which have some other connection with the original story.

A: This may sound crazy, but it’s made me a lot happier.  I’ve always loved the story of Romeo & Juliet but hated the maddeningly avoidable tragic ending.  Giving the tale an alternative outcome has been very cathartic.   I originally wrote it for myself, because it was the ending I’ve always wanted.

Aside: Sue’s claim isn’t the least bit crazy. This article explains that writing reduces stress levels and is great for mental health.

Q: Where does this story fit in with the rest of your work?

A: It’s very much a stand-alone book.  My other novels, Nice Girls Don’t (published in July 2014) and The Unkindest Cut of All (due for release in 2015), are more mainstream romantic intrigue.

A: I’d love to know what makes her say that.  Yes, there are some very good Catholic writers, but then, there are also plenty of good writers of other faiths!   To answer your original question, I did several short writing courses with the Open University, and a few courses run by other writers.

Q: So I guess that you wouldn’t agree with John Irving’s claim that you can’t teach writing. You can only recognise what’s good and say ‘keep doing that’.

A: Absolutely not.  I would never have contemplated writing romantic fiction if I hadn’t been properly taught how it should be done. 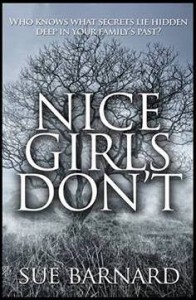 A: Yes and no.  I read the first book, but that was only because when it came out I was working in a bookshop, and the customers were asking our advice about it.  We even had one elderly gentleman who asked if it was a suitable gift for a ten-year-old girl!  (I can only assume that he’d heard that it was based on the Twilight novels – something which I had to have pointed out to me, even after I’d read it!)  I didn’t enjoy it at all, I’ve felt no inclination whatsoever to read the other books in the series, and I’d never recommend it to anyone.  This wasn’t just because of the subject-matter, but also because it was appallingly badly-written.  This was particularly frustrating because I know several writers who have had far better work turned down.  My only consolation was that I read the shop’s preview copy, so at least I hadn’t paid good money for it!

Q: Are there any books that you would describe as ‘life-changing’?

A: The book which changed my life was That Devil Called Love

by Lynda Chater (first published in 1999).  It’s a new variation on the Faust legend, but transported to the present day and told with great perception and humour.  It’s a story in which the heroine finds out the hard way that youth, beauty, wealth and fame don’t necessarily hold the key to happiness.  It made me much more appreciative of my own life and of what I’ve managed to achieve.

Here’s where you can find out more about Sue and her writing:

Shop at the Crooked Cat Bookstore.