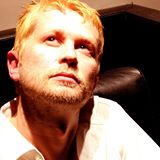 We started out with big ideas. Well doesn’t everyone? There was nothing standing in our way. Apart from the fact that I for one can’t organise my way out of a paper bag. And I speak from experience. Polly would be gone, shuffling tourists around ancient Greece, for most of the months leading up to it. Which left me and Claudia. Only one of whom could cope competently with a paper bag.

“I think we should give up,” Claudia said at some point. Okay she didn’t, not in those words, but that was the gist. I ummed and ahed. We decided to defer to Polly, mumbling to aging Americans somewhere at the business end of a bit of ancient history.

“Nonsense,” Polly said down today’s equivalent of a crackly telephone line. “Not a bit of it.” 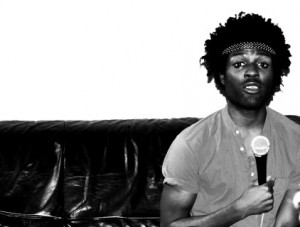 I explained about the paper bag. She was unmoved. “Thing is right,” she said, “we should just do it this year and even if it’s small, then we would have started, and we’ll learn loads about how to do it bigger and better next year.”

And so it was decided. The First Ever indieberlin Book Fair Thing would take place as planned. We would be undaunted.

There are book fairs big and small in Berlin and in wider Germany too, but we wanted one that was dedicated to the truly independent book world. Writers who publish themselves, the cover designers that do their covers for them, the translators who translate indie books, all that kind of thing. It seems that of late the larger book fairs are finally acknowledging the indie book world and to some extent featuring it, welcoming it in out of the cold now that it’s learnt to behave itself – but as a sideline, as something extra. But we don’t want to play the poor relation, we don’t want the scraps, we want the meal option goddamit. We want to blow the whole thing wide open. We want the revolution. We want to man the barricades and smoke Gitanes. Or at least leave them burning in our fingers. 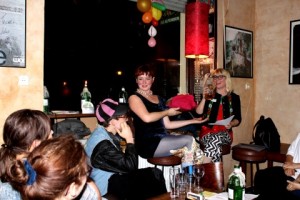 I’m getting carried away. Sorry.

So we scaled down and we said, we’ll make it a soiree. We’ll make it a fun thing. We didn’t rent an impressive venue, we talked to a friend with a bar. We didn’t fly in the speakers we would have loved to have there, but we did have amazing authors from Berlin reading.

And of course, most important of all, we had gimmicks. We had the Literophone, invented mere days before the night: We took a drum booth squeezed into the small live room at the back, fluffed it up, made it cosy, and hooked up an old-fashioned telephone to Polly’s iPhone. Then Polly stuck cards from her favourite writers from the UK and the US who couldn’t make it to Berlin up on the booth wall, like ladies advertising their wares in telephone boxes. They sat by their phones at home, wherever they were, with manuscripts laid out before them. Someone would sit in our fluffy booth at the back of the bar in Berlin and ring someone else a thousand miles away who would then read their poem or writings down the phone line, far off and yet incredibly personal.

We also set up a laptop in one corner with the idea that anyone who came along could contribute to a story which would be written over the course of the day. We had tables where people could lay out their books to show and sell. 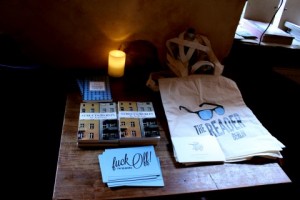 From thereaderberlin.com, The Reader Berlin, photo by Mia Morris.

It was a great night. We had eight speakers, fifteen writers in the bar reading, twelve writers sitting somewhere in the world reading to the fluffy booth over the Literophone, we had live acoustic music and a DJ. We had to back down on

But all in all it was fucking great. I’m already looking forward to next year, this time with a glitter bomb, at least.

The people behind the scenes…

Noel Maurice, who wrote this article, is the co-founder of indieberlin, a networking site dedicated to independent art, literature, music, fashion and lifestyle.  Originally from the UK via a childhood in Johannesburg, he has been resident in Berlin since 1991. Describing himself as a ‘recovering musician’, he is the author of The Berlin Diaires, a trilogy detailing the East Berlin art and squat scene of the early 90s. 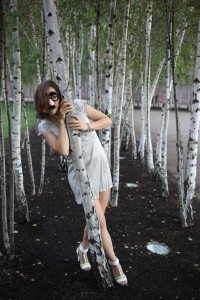 The Polly referred to in this article is Polly Trope, (pictured above) IndieBerlin’s English language lit editor and author of Cured Meat. She co-organised and -hosted the event. You can read my interview with her about Cured Meat here. It also features an extract from the book.

Claudia Rapp, IndieBerlin’s German language editor was the third vital link in the organisational chain, without whom none of this… etc.

Among those authors who read on the day was author Jonathon Lyon and the wonderful Jane Flett.

And numbered among those on the UK end of the Literophone was the Imagination Thief himself, Rohan Quine, and American poet Sarah Maquire.