A Day in the Life: Alison Morton 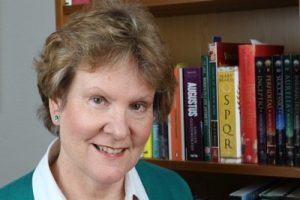 Today I am delighted to welcome Alison Morton to my occasional author interview series, A Day in the Life.

The first five books have been awarded the BRAG Medallion. SUCCESSIO, AURELIA and INSURRECTIO were selected as Historical Novel Society’s Indie Editor’s Choices.  AURELIA was a finalist in the 2016 HNS Indie Award. SUCCESSIO was selected as an Editor’s Choice in The Bookseller. The sixth, RETALIO, came out in April 2017.

A ‘Roman nut’ since age 11, Alison has misspent decades clambering over Roman sites throughout Europe. She holds a MA History, blogs about Romans and writing.

Now she continues to write, cultivates a Roman herb garden and drinks wine in France with her husband of 30 years.

Q: Please tell us how you came to be a writer.

My life has been full of words – translator, writer of academic theses, copy writer, government paper writer, military report writer, small business owner – but I came to novel writing later in life, in 2009. The trigger was a bad film full of terrible dialogue, higgledy-piggledy continuity and implausible plotting. I knew I could do better. I bashed out 90,000 words of a story that had been bubbling in my mind for several decades. That first draft was rubbish, of course.

Q: Who gave you your first encouragement as a writer?

My now critique partner, Denise. Like me, she was a tough business owner but one day she bravely confessed to have written a novel. I couldn’t help but stare at her. Then I confessed it, too. She persuaded me to join her writers’ group and we made our journey together from there, celebrating, commiserating and giving each other brutal but loving critiques. 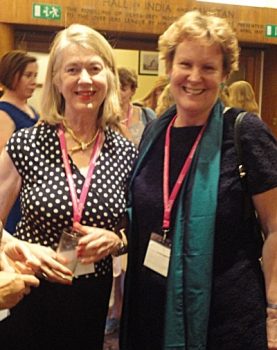 Q: You generally write thriller stories in the genre of alternative history. What can readers expect?

Thrillers must grip the reader, preferably excite their mind and heart, so apart from a complex story, I strive to make the characters within my books vivid, relatable and realistic. Carina and Aurelia are tough women, intent on protecting their beloved country but also on keeping their own loves burning bright. However, not all my characters are nice…

The aim of writing alternative history is to indulge my own deep obsession with the Roman civilisation and to provoke. Roma Nova is a society that lives by strong Roman values and culture, yet it’s an ‘egalitarian plus’ one ruled by women. However, men are not disadvantaged. I have fun mirroring the gender roles; Jamie Bond than James Bond.

Readers will find historical allusions; my books belong to the ‘what if’ subgenre of historical fiction, so I’ve used historical logic to project Roma Nova forward from AD 395 to the present. History has taken this particular course in my books. It could have taken many other paths at any other time. Researching the last known historical facts of AD 395 brought home to me that it’s the ‘for want of a nail’ idea that makes the whole discipline so interesting.

Q: Where is the series set and how did you decide on its setting?

Roma Nova lies ‘somewhere in south central Europe’. It’s small, about the size of Luxembourg with borders to New Austria (Neuösterrich) and the Italian Confederation. When you build a new world, it’s a good idea to model it on a real place or you could trip up on climate, crops or mountains. I chose Slovenia as Roma Nova’s geographical pattern. 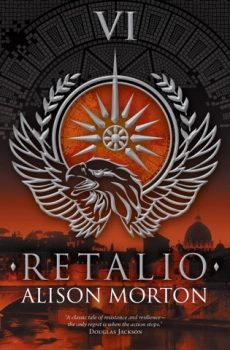 Early 1980s Vienna. Recovering from a near fatal shooting, Aurelia Mitela, ex-Praetorian and former foreign minister of Roma Nova, chafes at her enforced exile. She barely escaped from her nemesis, the charming and amoral Caius Tellus who grabbed power in Roma Nova, the only part of the Roman Empire to survive into the twentieth century.

Aurelia’s duty and passion fire her determination to take back her homeland and liberate its people. But Caius’s manipulations have isolated her from her fellow exiles, leaving her ostracised, powerless and vulnerable. But without their trust and support Aurelia knows she will never see Roma Nova again.

“As always Alison Morton’s alternative world feels utterly authentic. RETALIO reaches an explosive climax and the only regret when the action stops is that this is the final book of a remarkable trilogy.” – Douglas Jackson, author of Gaius Valerius Verrens series

Luckily, I have a general understanding of European history and an obsession about Ancient Rome, but I was surprised about how much there was to learn about my jumping off point of AD 395. Ancient civilisations are slippery to record as artefacts and texts are not always to hand, but the Romans and their complex society produced more ‘stuff’ than any other, and left a great deal of it behind. Think of all the museum collections around the world brimming over with faience, mosaics, implements, taps, swords, glass and precious metalware including jewellery and coins.

Q: Do you have a technique for keeping track of your what’s happening in your novels?

Ha! Two things. Firstly, I’ve developed a timeline grid which serves as DIY index to the book. I can keep track of who said what to whom, of the main actions in scenes in each chapter and of what day, week or season we’re in. Every time I finish a writing session, I make brief notes in the grid. It’s a mini discipline that also enables me to review what I’ve written. And when it comes to revisions and editing, it helps me to track the flow of the story and each character’s role very quickly. Readers can download a sample for their own use.

Secondly, I use a traditional Excel spreadsheet for the characters’ ages at the time of each book and at the time of important events in the stories. For the principal ones, I have additional information such as birthdays. Writing six books across forty years with tens of characters, the complexity rises to Game of Thrones level!

Q: Do you believe that you write the book you want to read?

Yes. I couldn’t find a modern equivalent of Ruritania, or an intelligent action thriller led by a capable and competent woman. The last one I read was Modesty Blaise by Peter O’Donnell. 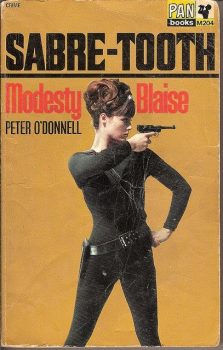 Q: Do you work to a set word-count each day?

Q: Where do you get your inspiration from?

Who knows? I suspect it’s a mixture of building on knowledge, exploring questions I’d like answered and experimenting with ideas. But more than these, it’s the characters. The protagonist appears in my mind, then her antagonist, love interest and comrades emerge. I let them circle around in my head, then throw a problem at them and see how they react. The characters then develop as they deal with the problem in the story.

Ah! Roman names. I wrote a whole article about that. Briefly, Roma Novans kept their nomina (family name) of which they were very proud, and developed the custom of adding a praenomen to give each family member an individual first name instead of using the impersonal maior (older) and minor (younger). They were only a few hundred at the beginning and each individual was needed, and valued, for the colony to survive.

And so our heroines’ names have followed Roma Novan tradition: their personal names are Carina and Aurelia and their family name Mitela – the nomen used in the fourth century AD by their far-off ancestor, Gaius Mitelus. Men change their birth family name to that of their contracted partner.

And for the other characters? Not easy as Romans had so few praenomina. And no, they weren’t all called Marcus! I tend just to use the nomina or surnames to cut confusion and here I have a bit more flexibility.

Oh, and I urge readers who are writers to check names via Google. In these litigious and sensitive times, you don’t want to find out that there is a pop star, child molester or business magnate with the same name as your main character. 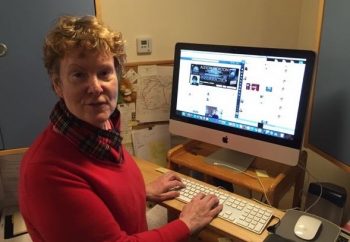 Q: How do you create and construct distinctly individual supporting characters?

Their primary function is to help the protagonist on their journey, objective or quest. Usually, they are the love interest, a foil, an antagonist, a comrade, an elder stateswoman, a mentor or mentee, a catalyst or a messenger. If they don’t fulfil any of those roles, they really have to fight their corner for existence. They must have their own story and one which interweaves the main narrative. And if I bring one in at the beginning I like to use them several times throughout the story.

Q: Which professional services won’t you skimp on?

Three absolute ‘must haves’ are professional editing, a well-designed cover and properly formatted and designed book interior. You can get away with using a patient friend or even yourself for the final proof-reading if done methodically. 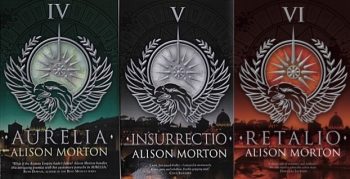 Q: How do you feel when you have finished writing a novel? Are there any particular characters that you have found it hard to let go of?

Finishing a book is like a little death. You become so immersed in the characters’ (rather exciting) lives and then you go back to your own Real Life. The worst was leaving the heroine at the end of AURELIA. I had to write two more books about her (INSURRECTIO and RETALIO).

Q: I just stumbled across this in an article by Adam Haslett. ‘A psychiatrist friend once pointed out to me that one of the definitions of psychosis is a fixed belief in an imaginary world lasting months or years, which no one but the patient himself is able to perceive. He wondered aloud if this wasn’t also a decent definition of a novelist.’ Do you think he has a point?

Yes. I know that Roma Nova is real. You can book a ticket there via Air Roma Nova, you know…

Q: Where can you find out more about Alison and her work?

Connect with Alison on her Roma Nova site.

Or watch the INCEPTIO book trailer!