Contemplating the loss of our horse chestnut 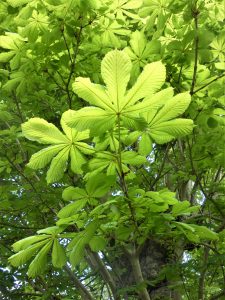 In our back garden, almost on the boundary with our neighbour’s garden, stands a lone horse chestnut tree. It has been here longer than our house, and our house first appeared on an Ordnance Survey map in 1903. This is the time of year when the tree is just coming into leaf and, as they unfurl, those leaves begin to look like hands. It is the time of year when blue tits usually flit from branch to branch and sometimes stay to nest.

But not this year.

This year, a larger creature has been carrying out earthworks behind the trunk. On inspection we discover a hole in the trunk and shine a torch inside. We have known for some time that the tree was diseased. We call in a tree man who reaches for the top of the trunk and drops a stone. He retrieves it from the bottom of the tree. The trunk, which looks so substantial, is entirely hollow.

It will have to come down. We know this, but are not quite ready to accept it. Our hearts were almost broken when we last had it pollarded. We hadn’t realised how severe the cutting back would be.

In my latest novel, Small Eden, Robert Cooke is a man trying to hold back the hands of change. Robert’s father Walter was a person who carried in his head the imprint of the London he knew as a boy. As a grown man, Robert mourns the loss of the hedgerows he knew from his own boyhood.

He worries that Carshalton will simply become another London suburb.

Robert doesn’t point out that the quarry was there first, that where the man’s cottage stands the road used to be lined with double hedges of hawthorn and hazel, seething with insects, blooming with dog rose. The hedges were protected by ditches from which grew elms of considerable age, in whose trunks nuthatches made their homes in deserted woodpecker holes. This man has a right to live near the place he works, he supposes (close enough to go home for his dinner), but Robert cannot help but mourn the trees.

Why do we become so attached to trees? It is partly their age. Although many of the trees in Carshalton Park and Beddington date from the eighteenth century, some in our locality are said to be 500 years old. There is reassurance in the knowledge that a tree was there long before you were born and will be there long after you are gone. The concept of a Tree of Life dates back as far as ancient Egypt and is found in many religions and philosophies. In watching them shed their leaves in autumn, and re-flowering in the spring, trees are for us powerful symbols of renewal. We are only now beginning to understand that they are sentient beings, and communicate with each other.

As I do, Robert Cooke has powerful memories of the trees of his childhood.

From his crouching position Robert looks ahead to a grouping of alders and ash. Many a time he has sought sanctuary beneath their boughs, settling his rump between their roots, his back against their trunks. For a moment – a moment so fleeting he doubts himself – he sees them, or shadows that resemble them. His shadow-sons. The trees will stay. Not his father, speaking to him from somewhere beyond, but a stray thought. The first stirrings of something.

The story that follows is of how Robert creates a garden in the memory of the sons he has lost, and he does so in a place that was important to him as a child – a disused chalk pit, where he found refuge when his family first moved from London where everything was familiar to him, to a strange and backward place called Carshalton.

Little does he know when he starts out on this venture what else he stands to lose.

“I imagined I was creating a little Eden in memory of them, but…” He falters. “It became so full of other people that they were squeezed out. The tree walk was for them. And now…” Even as Robert gave the instruction for the trees to be felled he mourned their loss. Of all his questionable decisions, it is this final betrayal he hopes will escape the eyes of God.

And now it seems it is the turn of our horse chestnut. I didn’t know when I wrote the prologue of Small Eden that this day would come so soon. I thought the tree would outlive me.

Available for pre-order from 7 April 2022

At least, in this one sense, it will live on.

A horse chestnut sits almost on the boundary, a lone trunk, planted by God or one of his smaller creations. It stretches its branches out over the fence as if to reclaim lost territory. Come autumn, half of its leaves will be shed in his neighbours’ garden, half its haul of conkers will fall, armoured cases splitting, hatching, to be collected by their boisterous young sons. Pan sits to one side of its trunk, Puck to the other. “I had this cottage built,” he says.

“We heard it was the gate house for an estate.”

“Did you?” To leave this uncorrected, knowing that it may in time become received wisdom, is part of Robert’s penance. He has Miss Hoddy’s design and there are, of course, her paintings. He might invite his neighbours into his parlour to show them the scene with the tennis players in front of the pavilion and the edge of the cottage. The chimney, the dormer window, the eaves. Better still, he could take the painting down from the wall and take it outside to show them. Point out that the road runs through the very spot where the game of tennis was being played. But that would be dangerous.