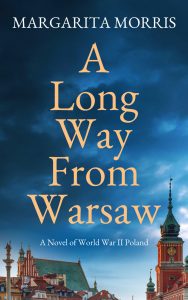 Today I’m delighted to welcome Margarita Morris to my blog. If you have yet to discover Margarita’s wonderful novels, she writes historical fiction, placing ordinary people in extraordinary circumstances.

As a student of French and German at Jesus College, Oxford, it was an unforgettable trip to Berlin in 1987, including the former East Berlin, that later became the inspiration for her Berlin Wall escape novel Oranges for Christmas. Margarita then pursued her interest in East Europe by writing a novel about the Hungarian Uprising of 1956 in Goodbye to Budapest (currently on my bedside table). Her latest offering A Long Way from Warsaw will be published on 29 July and explores the turbulent story of Poland in World War II. It’s that book she’s going to tell us about today. Over to you, Margarita!

A Long Way From Warsaw is a novel that tells the story of Poland in World War II through the eyes and experiences of the fictional Nowak family living in Warsaw.

I’m interested in the way that ordinary people are forced into extraordinary circumstances when confronted with traumatic events, such as war. Although the family in my story is fictional, what happens to them happened to many such people in Poland during this turbulent time.

Warsaw, 1939. Poland is on the brink of war, and for Anna Nowak, life will never be the same again.

Her brother, Lech, is called up to fight as an officer in the Polish army. He expects to be home in a matter of weeks, but it will be many years and a journey of thousands of miles before he can be reunited with those he loves.

Anna’s younger brother, Jan, dreams of being a soldier too. But his dreams turn into nightmares when the Germans invade and his best friend is incarcerated within the ghetto.

As for Anna, her hopes of studying art are crushed when the German occupiers close Polish universities. Instead she risks her own life by serving in the resistance. But with the Gestapo closing in, and with rumours of prisoners being sent to concentration camps, how far is she willing to go to save her country?

As Poland is carved up by both Germany and the Soviet Union, the fate of ordinary people hangs in the balance. What does it mean to be Polish when Poland itself is threatened with extinction?

Packed with authentic historical details, A Long Way From Warsaw is a sweeping novel of family, courage and the indomitable human quest for freedom.

A little background to Poland as it was in 1939.

Poland has a long and complicated history. Suffice to say that the Second Polish Republic was established in 1918 in the aftermath of the First World War when the German, Austro-Hungarian and Russian Empires collapsed. Poland’s borders were drawn up at Versailles and were further east than they are today. For example, the Second Polish Republic encompassed the cities of Lwów, now Lviv in Ukraine, and Wilno, now Vilnius, the capital of Lithuania. Wrocław, now in the west of Poland, was in Germany and was called Breslau. Poland’s access to the Baltic Sea was via the Danzig Corridor, a strip of land that divided most of Germany from the province of East Prussia, a situation that Hitler found intolerable.

The Second Polish Republic was extremely vulnerable because she was sandwiched between two very powerful nations, neither of which thought that Poland had a right to exist: Germany and the Soviet Union.

It’s well known that World War II started when Germany invaded Poland on the 1 September 1939. In response, Britain and France declared war on Germany two days later. What is less widely understood, at least in the west, is that the Soviet Union also invaded Poland on 17 September. In August of that year Nazi Germany and the Soviet Union signed a non-aggression pact – the Molotov-Rippentrop pact – named after the two foreign ministers. The pact was a guarantee of peace by each party towards the other. Hitler and Stalin were allies and they carved Poland up between themselves. Of course, the pact was torn to shreds in June 1941 when Germany invaded the new western border of the Soviet Union.

Poland found itself at the heart of the battle between fascism and communism, whilst not wanting either.

In my novel, the three siblings of the Nowak family (Lech, Anna and Jan) and their parents all have very different experiences of the war. Lech is called up to fight and is optimistic about Poland’s chances, until the German Blitzkrieg takes Poland by storm. Escaping eastwards, he soon finds himself at the mercy of the Soviets. Anna puts herself in danger by becoming an active member of the resistance. Arrested by the Gestapo, she suffers the fate of many Polish women at Ravensbrück concentration camp. Jan is only eleven when war breaks out. He thinks he’s too young to do anything useful, but in 1944 he joins other teenagers in the Polish Home Army in the Warsaw Uprising. By the end of the war, the members of the family will find themselves scattered to the four winds, their country irrevocably changed.

On location in Germany and Poland.

I do like to visit the places I write about and in 2020 I managed a trip to Germany and Poland, despite the pandemic. My first stop was Berlin from where I visited Ravensbrück concentration camp. For a moving and detailed account of life at Ravensbrück, I would recommend Sarah Helm’s book If This is a Woman. During the war, Ravensbrück was a place of shocking cruelty, notorious for the illegal medical experiments performed on the women who became known as the Polish Rabbits. Today, it is a solemn and fitting memorial to those dark times.

Warsaw was razed to the ground in the aftermath of the Warsaw Uprising, so the beautiful old city you see today is a reconstruction. Walking around the city, I found dozens of memorials to the Warsaw Uprising, sometimes just a small plaque, some flowers and a lighted lamp. The Warsaw Uprising was a fierce two-month-long battle between the Polish Home Army and the Germans in August and September 1944. It is fittingly commemorated in a set of dramatic statues near the Krasińskich Gardens. Noman Davies’s book Rising ’44 gives a vivid account of Poland during the war and the Uprising in particular.

Thank you so much, Margarita. It certainly helps to have the historical backdrop.

A Long Way From Warsaw will be published in Kindle and paperback on 29 July 2022, but the Kindle Edition is available for pre-order immediately. The Kindle version will be available to read on Kindle Unlimited.

A Long Way From Warsaw – http://mybook.to/alongwayfromwarsaw