A Visit to Sissinghurst Castle: Book Conservation in Action 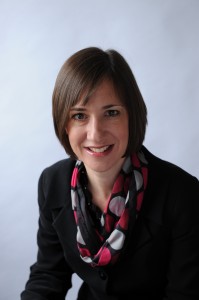 You may ask why I love physical books.

What could be more absorbing than trawling the bookshelves of two of the most fascinating characters of the twentieth century, Vita Sackville-West and her husband, author, diplomat and politician, Harold Nicolson?

At Sissinghurst Castle, a team of expert conservationists are doing just that. This painstaking project will last for three years. Damage has been wreaked by a number of culprits. Damp, particularly prevalent in Vita’s writing room in the Elizabethan Tower, has taken its toll. (Taking photos of the interior is strictly forbidden, but you can see it here. Silverfish have eaten away at corners, creating map-like contours and paper peninsulas. Perhaps worst of all, hardback books have fallen victim to gravity. The collection is suffering from the bookish equivalent of fallen arches. A unique ‘shoe’, designed to be invisible, is being created to support the fragile yellowing pages of each book.

Librarians might walk into the Long Library and claim that the collection has not been catalogued correctly. There is no particular order – or, that is to say, no discernible order. Nothing of which Georges Perec  would approve. And yet the experts are returning the books to the precise positions in which they were found. After all, in a project that offers tantalising glimpses about the owners of the collection, some pattern may yet reveal itself. Perhaps, for example, the shelves represent the order in which the couple read the books. 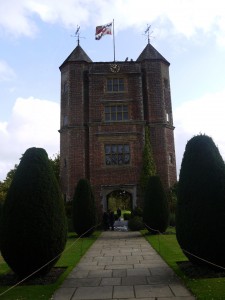 On first glance, the 11,000 volumes may not all appear to be of national significance. The collection was assembled in the twentieth century and consists, for the main part, of books written in the twentieth century. There are some first editions, for sure. But, in most cases, the value is not in the books themselves. It is in the secrets the books are gradually offering up. Because these books were not ‘wallpaper’. They were used. 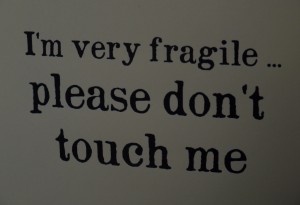 Both Vita and Harold wrote book reviews and columns for various publications. Pages are littered with pencil comments and page numbers for future reference – comments so cutting that they were toned down for the final copy. The cover of one Penguin paperback is marked, quite simply, ‘very bad’. The bindings of a heavyweight eighteenth century volume have peeled away to reveal what has been identified as a fifteenth century map. In this piece about Vita’s collection of gardening books, Harvey James comments on how Vita’s planting schemes took their influence from Shakespeare, the Bible or Eastern travel. The Guardian newspaper reported on the discovery of verse that Vita wrote to her lover, Violet Trefusis (Nee Keppel), in French. But far more moving is an annotation from Harold, unearthed by Conservation Assessor, Carla Danella. Found in the book The Enchanted Mountain, she had goosebumps as she held it in her hands and read: ‘This is the book that my darling Vita was reading when she died.’

Only a real book has that power.

The project continues until 2016. If you are planning to visit Sissinghurst Castle, check first to see if the conservationists will be on hand.