On her life-long love affair with ancient Rome 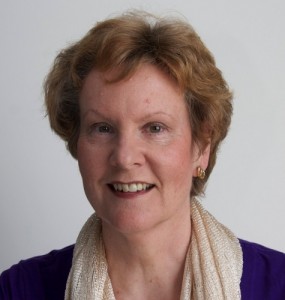 Today, I’m delighted to invite Alison Morton to my blog. Alison writes Roman-themed alternate history thrillers with strong heroines. She holds a bachelor’s degree in French, German and Economics, a masters’ in history and lives in France with her husband. She is a member of the Romantic Novelists’ Association’s New Writers’ Scheme, the Historical Novel Society, the Alliance of Independent Authors, International Thriller Writers and the Society of Authors. A ‘Roman nut’ since age 11, she has visited sites throughout Europe including the alma mater, Rome. But it was the mosaics at Ampurias (Spain) that started her wondering what a modern Roman society would be like if run by women…

INCEPTIO, the first in the Roma Nova series, which was also shortlisted for the 2013 International Rubery Book Award, and PERFIDITAS, the second in series, have been honoured with the B.R.A.G. Medallion®, an award for independent fiction that rejects 90% of its applicants. INCEPTIO and PERFIDITAS were shortlisted for Writing Magazine’s 2014 Self-Publishing Book of the Year Award. Alison’s third book, SUCCESSIO, which came out in June 2014, was selected as the Historical Novel Society’s Indie Editor’s Choice for Autumn 2014 and has also been awarded the B.R.A.G. Medallion.

Q: Alison, I’m going to kick start our discussion about historical fiction with a horrible teaser taken from The Teleportation Accident by Ned Beauman.

“I’ve never seen the point in historical drama. Or historical fiction for that matter. I once thought about writing a novel of that kind, but then I began to wonder, what possible patience could the public have for a young man arrogant enough to believe he has anything new to say about an epoch with which his only acquaintance is flipping listlessly through history books on train journeys?”

Of course, you have circumnavigated this problem by providing readers with an alternative history of your own creation, but I’m interested in your reaction to this.

Ned Beauman’s protagonist is speaking with inverted, rather defensive, faux modesty. Far better people than I can put the case for historical fiction but I was taken with Conn Iggulden’s (The Gates of Rome) talk at the recent Historical Novel Society Conference. He said that the historical novelist’s job is to research diligently and fill in the gaps in history intelligently. In this way, fiction benefits history and history benefits fiction. Q.E.D.

Q: INCEPTIO is the first in your series. Which year is it set in? 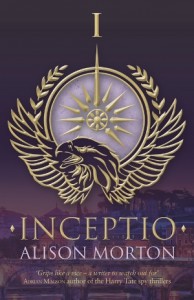 Q: To write alternative history with authenticity, presumably you have to be equally well-versed and researched about actual events as an author writing a more conventional historical novel.

Alternate (or alternative) history is based on the premise that the standard timeline diverged at a certain point and followed a different path. In my stories, this is 395 AD when emperor Theodosius issued the final edict banning all other religious practice but Christian, on pain of death. This gave me a baseline of the end of the fourth century so I researched the prevailing social, economic and political conditions. Rome changed significantly during its 1229 year existence [link: http://alison-morton.com/2013/07/28/roman-doesnt-mean-one-thing/ ] in the West. By 395 AD, solidi had replaced sestertii and denarii, for instance. Regional government was localising with ‘barbarian’ warlords acting less like client kings of Rome and more like autonomous leaders with delegated powers and control over their regions. The late 4th century was a long way from the golden years of Vespasian’s or Trajan’s rule.

You have to consider what would seem important to the Roma Nova colonists in those transitional times: security, food, and hope, ultimately survival. Their core Roman values would have bolstered them and formed a social glue while they struggled for existence.

Q: And, of course, in addition to this, you have to have mapped out the last two thousand years’ worth of alternative history. That’s one hell of a task you created for yourself.

My mantra has been ‘follow historical logic’. Although our real history often hangs on little things or accidents, the historic dynamic generally points in one direction and one that it will return to even if it goes ‘off piste’ from time to time. In our own real timeline, Britain very nearly quashed the rebellion in its American colonies in 1776. In my imaginary world, British rule in the New World didn’t end until1865, but end it did. The North American colonies banded together as the Eastern United States. The southern part of what we call North America – California, Texas, and Neuvo Mexico – were retained by the Spanish Empire, Louisiane and Québec stayed French to this day. All perfectly possible.

In Europe, there was one Great War that lasted from 1925-35 and afterwards Germany was split back into small states by the allied nations. Germany is essentially a country that has always been local and regional, and in my imaginary world had only been united for less than a seventy years so this seemed logical. More here: http://alison-morton.com/roma-nova/roma-nova-history/ 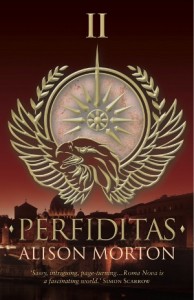 Q: With historical fiction, the author often relies on the reader who benefits from hindsight when the characters do not. How far do you play with the difference between what actually happened and the ‘what if’ scenario you have created?

Writing and reading in alternative settings is like stepping into the void, so I use familiar anchors to prevent readers becoming alienated and throwing the book on the floor. For instance, a blue uniformed figure driving a car with door markings and a flashing blue roof light will suggest law enforcement.

Another technique is to mine elements from the historic record. In my books, the heroine becomes a spy/special forces operative, so I reached back into history and plucked the Praetorian Guard forward into the 21st century. Not only does this build on the thoughts of toughness, a dash of ruthlessness, a sense of duty and glamour that we may already have about them, it uses their historic name to anchor them as archetype Romans guarding the ruler and the state. I’m aware they became corrupt in real history, but as in straight historical writing, in alternative history you can bend the rules a little.

Things will have progressed through the alternative historical timeline, and you can use elements harking back to the original culture. My 21st century Roma Novans stand at the forefront of the digital technical revolution as an echo of their engineering and organisational expertise in ancient times.

Having established anchors, then you can introduce your own speculative ideas such as given the unstable, dangerous times in Roma Nova’s first few hundred years, the daughters as well as sons had to put on armour and carry weapons to defend their homeland and their way of life. Fighting danger side by side with brothers and fathers reinforced women’s roles. And they never allowed the incursion of monotheistic paternalistic religions. So not too far a stretch for women to have developed leadership roles in all parts of Roma Novan life over the next sixteen centuries…

In essence, the characters must live in their world naturally. To them, their world is normal, just as ours is to us. Neither they nor the readers know what could happen next, which is part of the fun…

Q: When did your fascination with Rome begin?

At age 11. I was on holiday and fascinated by the mosaics in Ampurias (huge Roman site in Spain), I asked my father, “What would it be like if Roman women were in charge, instead of the men?” Maybe it was the fierce sun boiling my brain, maybe early feminism peeping out or maybe just a precocious kid asking a smartarse question. But clever man and senior ‘Roman nut’, my father replied, “What do you think it would be like?” 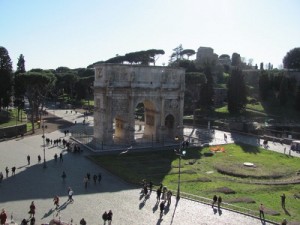 Q: Tell us about Karen, whom we meet in INCEPTIO.

“Me? Karen Brown? I’m nothing special, just a normal twenty something, living in New York in the EUS. That’s the Eastern United States, north of Louisiane and south of Québec for those of you who are foreigners. My Mom, who was from Roma Nova in Europe, drove herself off a cliff when I was three and my Dad – I loved my Dad so much – he went when I was twelve. I cried when my cousins made me leave my beautiful New Hampshire home and live with them in the Mid-West. I ran away to the city the day after I graduated high school. I have a boring job, but love my weekends of fresh air in New York Kew Park where I volunteer.

I’m pretty easy going, I don’t like or dislike anything in particular. No, that’s not right – people being unfair or unkind bugs me. Why do they do that? I jog, drink coffee, laugh with the kids in the park at weekends, but I often feel I’m in the wrong place doing the wrong thing. I have a vague thought I’d like to do more than be a junior ad exec but at present, I have a safe job and one or two friends.”

Of course, that is all about to change…

Q: I love the confidence of your one-word titles. They are perfect for thrillers, but they also remind me of Roman mottos I have seen inscribed on buildings. Was it a struggle to get them exactly right?

Yes! Sometimes titles blink into your brain like little ribbon-tied sparkly gifts, other times it’s the battle of the Sisyphus. I’ve studied a lot of Latin inscriptions and apart from always being written in capitals (Here’s why: http://alison-morton.com/2014/03/31/roman-capitals/), the thing that stands out is that they’re succinct. To capture the ‘Roman-ness’, mine had to be the same.

INCEPTIO was a sparkly gift; it’s Latin for ‘beginning’ so was perfect for the beginning of Karen/Carina’s adventures. Job done.

PERFIDITAS – we’re back with Sisyphus. I admit PERFIDITAS is partly made up! It’s based on perfidia, which means faithlessness, treachery, perfidy. The trouble was there was a very popular song called ‘Perfidia‘ written by Mexican Alberto Dominguez and which has been recorded by countless artists. I didn’t want the book to look as if it was about a girl called Perfidia, so I piggy-backed perfidia onto the form used in romanitas (‘Roman-ness’) to change the word but retain the meaning.

SUCCESSIO in Latin means ‘succession to position/ownership, successors collectively’ which was perfect for a story rooted in the next generation. 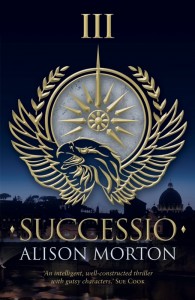 Q: You’ve worked as a professional translator for most of your career. How has this discipline informed and influenced your approach to writing fiction?

Translation is not about word substitution, but about conveying concepts. You know your work is to convey the message in your head onto the paper/screen in a way that will be clear to the recipient.

The other discipline is the quest for perfection. Translators research, draft, check facts, edit, swap with translation colleagues or use an external editor, proofread and then deliver the work to the project manager/the client. Sound a familiar process?

And dogged persistence in chasing around inside the contents of the thesaurus, your brain, accumulated corpuses and terminology banks until you find the exact word is a core translation skill!

Q: You’re currently writing the fourth book in the series. Do you think this has the potential to run and run?

I hope so! There are an awful lot of untold stories about Roma Nova waiting to be told…

Want to find out more about Alison? Visit her blog, her Facebook author page, or find her on Twitter, Goodreads and Amazon .