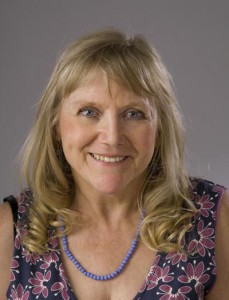 Today, I’m delighted to welcome Amanda Sington-Williams to my blog. Amanda lives in Brighton and writes short stories and novels. Her inspiration comes from travelling and other authors such as Emily Barr, Ian McEwan and Margaret Attwood.

She comes from a family of writers. Her cousin, Derrick Sington was renowned for his post war non-fiction work, her grandmother wrote romances and both her brothers David and Philip Sington are writers.

She has had numerous short stories published:

A Mother’s Love was published in an anthology, Dark Bard, by Indigo Mosaic Publications. Unseasonable Weather was published by Dead Ink Press and by Epiphmag.

Number Twenty Two was published by Writing Raw and will also be published in the Sentinel Annual Literary Anthology later in 2013.

Two Orchids was published in 2009 by Sentinel Literary Quarterly.

Growing Pains was published in an anthology of short stories in 2009 by Bridgehouse Publishing.

Her first novel, The Eloquence of Desire, was published by an independent press, Sparkling Books, in 2010 and has been translated into Turkish. She won an award for this novel in 2007 from the Royal Literary Fund. Amanda’s second novel Just Two Weeks

Q: Amanda, please can you start by telling us how you became a writer.

A: I have always written poetry but in 2002 I attended a two year course in Creative Writing. My short fiction won prizes and many were published. I wrote my first novel and studied for a MA in Creative Writing and Authorship at Sussex University. I write and mentor new writers full time now.

A: Yes, since my early teens.

Q: Who was it who gave you your first encouragement and what was your first success?

A: A long time ago I met Ian McEwan and he encouraged me to write. As for my first success, I won an award with the Royal Literary Fund for The Eloquence of Desire. Then for Just Two Weeks I won the IPR Agents’ Pick. 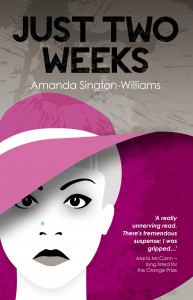 Book description: After being made redundant from a seemingly secure job Jolene Carr takes a two week break in the sun. On the first day she meets Raquel, another hotel guest. Little does she realise how this apparently innocent acquaintance will lead to terrible and lasting consequences. After a frightening incident she hits a conspiracy of silence from the locals and over the rest of the holiday she feels herself slipping into a vortex of fear. Back home, the nightmare continues and she realises that Raquel is stalking her. Her hippie mother and her partner Mark tell her she is imagining it all. All certainties, even about relationships, become fluid and treacherous as her past begins to unravel. If it wasn’t for Rob, her ex-lover who Jolene thinks has his own agenda, she would be left to cope on her own.
How much fear and betrayal can one person take?

“If you’re a fan of fast-paced, gripping suspense, this should be on your kindle.” Amazon reviewer

Q: You write psychological thrillers. What can readers expect?

A: If they read Just Two Weeks, they can expect to be gripped and not be able to put the book down. My writing style is fluid and fast. The dialogue is snappy. My descriptions of locations zone in on the unusual. I also use humour.

A: It doesn’t really. I am in my own bubble when I write.

A: I had a difficult childhood. I think I am constantly trying to work through it.

Q: The protagonist in Just Two Weeks is Jolene Carr. What five words best describe her?

Q: Where is the novel set and how did you decide on its setting?

A: Part 1 of Just Two Weeks is set in Sri Lanka. I wanted Jolene to be on holiday in a place where the culture and language were alien to her so she would feel ill at ease when things started to go wrong. Part 2 is set in The Lake District where Jolene lives. It should be a place where she feels safe, but the danger persists. I wanted it to be cold and rainy as a contrast to Sri Lanka.

A: In Just Two Weeks Jolene is the hero. She gets through her ordeal, finds out some truths and realises who it is she really loves.

Q: What were the major areas you had to research for the novel?

A: I had to research stalking. I also visited Sri Lanka and talked to the locals about their experience during the 2004 tsunami.

A: I came up with the title of Just Two Weeks halfway through Part 1.

Q: was your novel inspired by any real life events?

A: Only that I used to have the same job as Jolene.

A: I had always written literary fiction before and I discovered I really like writing psychological thrillers. 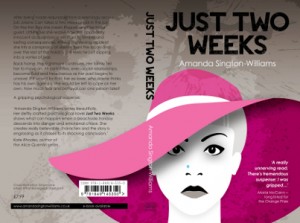 Q: Who designed your book cover? If you used a cover designer, what brief did you give them? (Please feel free to plug away.)

Q: I am lucky enough to have a nephew who is a graphic designer – Simon Lane. He has designed other book covers too. He read my book then we discussed the cover.

Q: Can you remember where you saw your first book on the shelves?

A: Yes I can. It was in Waterstones in Brighton.

A: My first novel, The Eloquence of Desire was dedicated to my mother who died the year before it came out. She influenced the story as it was set in Malaysia where she was born. I dedicated Just Two Weeks to my husband Dave because he patiently read many of the drafts.

A: I am working on another psychological thriller with a working title of The Longest Hour. I am also sending off my novel A Little Rain Will Fall for editing.

Q: Do you work to a set word-count?

A: I start with a single idea and allow the plot to develop organically.

A: If not likable, then I try to make it so the reader is empathetic towards them, that they are on their side.

Q: How do you create and construct distinctly individual supporting characters?

A: I brainstorm their backgrounds.

Q: What do you think the greatest advantage of self-publishing is?

A: I think the main advantage is that as a self published author, I have total control over the marketing and don’t pay commission.

Q: Do you find there is more of a sense of community with self-publishing than there is with traditional publishing?

A: Yes there are all kinds of online forums and groups that jointly help promote self-published books.

Q: And do you feel you have a stronger connection with your fans because you self-published?

A: I think I appreciate them more for trusting enough to buy my book. 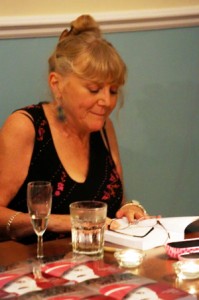 Q: You use social media to interact with your readership – how important do you think this is to becoming a success?

A: Self-publishing would be lost without social media.

Q: Which professional services won’t you skimp on? (editor/ professional proofreader? designer for your book interior.)

A: I wouldn’t skimp on any of them.

Q: And finally, what advice would you give aspiring writers?

Find out more about Amanda by visiting her website and and her blog.

If you enjoyed this post please share it. And don’t forget to subscribe to my blog if you would like new posts to be delivered directly to your in-box. Just enter your email address in the sidebar.