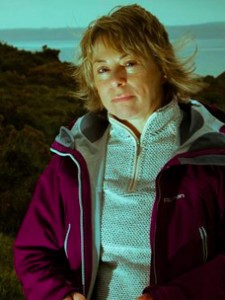 Today I’m delighted to welcome Jan Ruth to Virtual Book Club, a series of interviews in which I put questions to authors about their latest releases and their writing lives.

Jan lives in Snowdonia, North Wales, UK. This ancient, romantic landscape is a perfect setting for Jan’s fiction, or simply daydreaming in the heather. Jan writes contemporary stories about people, with a good smattering of humour, drama, dogs and horses.

Q: Jan, perhaps you’d start by telling us how you came to be a writer.

I had a fantastic English teacher through primary school, and another one in secondary who told me I should have gone into journalism, but I thought that sounded like too much hard work.

I didn’t write seriously until I was pregnant, and bored.

During this time I managed to destroy three secondhand typewriters, and dinner was invariably in a burnt-out pan at the bottom of the garden. I became obsessed. It was a story about a rock star called Frankie, set in the wilds of Northumberland. There was a girl called Maxine, a death on the moors, a wicked stepfather and several valuable Arabian horses. I think it covered every genre going. Sadly, my enthusiasm had no real structure and after nine agonising months I was forced to set fire to the entire manuscript, in case someone actually read it.

After this, I began to buy factual books about writing fiction and my second attempt, a novel called Summer in October, was selected by Anne Dewe, who was at the time working for Andrew Mann Literary Agents and wanted to set up her own company. Sadly, she couldn’t raise financial backing and it came to nothing.

Her interest in my writing was a massive boost but I failed to write anything else until we moved to North Wales eighteen years ago. A lot of life had happened to me by then and, combined with the new surroundings, my muse returned and Wild Water happened. Jane Judd, literary agent, wanted the book immediately but failed to find me a publisher. Having said this, I think her encouragement at this stage meant that I didn’t give up, and I found it especially interesting that, despite the lack of a contract, her personal endorsement was not only a turning point for me but possibly the best encouragement I’ve ever had.

Then in 2014, Accent Press happened. They took all five books plus a new, previously unpublished novel called Palomino Sky, which won’t hit the press till next autumn. Silver Rain

was the first title to be re-published with Accent Press. My firstborn, Wild Water, has gone through a dazzling number of changes and edits over the years but I’m pleased to say that on July 23rd this was the second title to be released by them. It’s a lighter read than the other titles, gossipy and fast-paced. 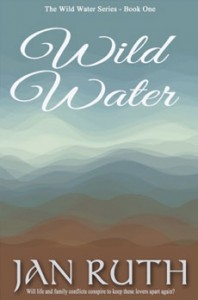 Contemporary family saga. I think! Specific genres have always been so restrictive but one of the great aspects of the rise of self-publishing is the acceptance of sub-genre. This has filtered into traditional publishing, to a degree.

Over the years I’ve been described as a blend of contemporary-literary-romantic-family saga – with the occasional crime twist and mostly written from the male viewpoint. How does this translate? Easier than you might imagine. My characters are invariably in their forties and fifties with problems generally rooted in the complications of relationships. The challenge was to strip away every cliché from these well-worn situations and let the characters inject new insights. There’s always humour, usually sarcasm or slightly dark. With the sequels – Dark Water and Palomino Sky – I was aware that I could begin to repeat themes, but the crime threads evolved naturally. That’s not to say crime takes over the genre of the book, they remain family/relationship focused. The style of my writing has changed slightly with each book, it’s become tighter and darker through the years. I’m not sure what this says, but I always aim to be to be relatable and entertaining.

Q: The protagonist in Silver Rain is Al. What five words best describe him?

Q: But part of the story is also told from Kate’s point of view. Why switch between different characters’ points of view?

I think more than one point of view always makes for a better story and sets up more convincing plot twists and misunderstandings. Silver Rain is told from Al and Kate’s point of view in alternate chapters. I tend to use this style in all my books, although not necessarily in alternative chapters. I do like clear chapter breaks when a different character takes over the story though, and although this is only a personal choice, I’m not fond of reading – or writing – head-hopping amongst characters within the same scene.

It’s set in Snowdonia, the Conwy Valley. It’s where I live, and although I’m not Welsh, I do feel this is my spiritual home. 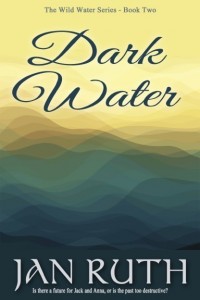 Dark Water, Part 2 in the Wild Water series, will be re-released in October

Q: Was Silver Rain inspired by any real life events?

Yes, although I didn’t realise it at the time, which is often the case. I wanted to write a novel featuring a character who was slightly less heroic than the norm, so Al was clear in my mind from the start. I’d reached the first third of the book when I had to down the metaphorical pen to travel for five weeks. All the promises that I’d continue writing during those long flights fell apart at the first hurdle. I’m clearly too old to cope with more than one time-zone!

I’ve never left a novel part-way through before but my experiences from the trip inspired part of the book to move to New Zealand. As we travelled through the vast, often primitive countryside, I realised it was the perfect hermit-home for Al’s theatrical mother. And my homesickness for Wales transferred to Al too, as we both came to understand more about our roots.

I write about real life, the complications of relationships and, in the case of Silver Rain, the impact of adoption. I think the isolation Al feels is very much akin to the problems faced by family living on the other side of the world, so I was able to draw on this to a large extent.

My main female character, Kate, is full of guilt. At age fifty, she feels burdened with the events of her husband’s death, her selfish sister and daughter, and her ageing mother. It wasn’t until I re-read some of Kate’s passages that I realised a lot of her angst mirrored my own feelings about the injustice, about the sheer horror of old age and how the mother-daughter relationship changes with time.

It sounds like a dreary book so far so let me say, there’s humour too. And yes, my mother really did try to order a catheter of coffee in a posh hotel.

Q: Do you feel under pressure to make your main characters likeable?

If you write predominantly to a female audience about love and family, then I do think the main characters need to be mostly likeable. That’s not to say they have no undesirable qualities but for my books I’d have to say yes. I do prefer something a little more unconventional though. Al of Silver Rain is  children’s entertainer and a house-husband. Jack Redman of the Wild Water books – my most popular character – is an estate agent. Where I’ve introduced unlikeable characters, such as Simon Banks in Dark Water, I’ve always shown the reasons behind their behaviour.

Q: Would you say that being a parent heavily influences your writing?

In a word, yes. My main driver is relationships and the parent-child bond is well explored in all of my books, from many different angles. 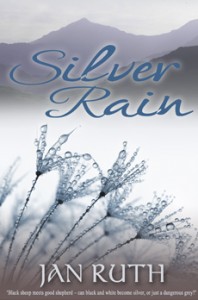 Click here to look inside or buy Silver Rain

Once inside, she was confronted by a naked man. Starkers! Well, he would be, since it seemed he’d been in the shower cubicle. She was too old to be embarrassed by nudity, but it was still a shock. The little wooden sign swinging on the handle outside had clearly said “vacant”, and there was a distinct absence of any noisy, running water. He was glistening, though, and his hair was dripping. Kate kept her eyes on his, although it was difficult not to glance down – almost impossible, in fact – but he was watching her every movement, so she felt not only trapped, but compelled to keep eye contact. Despite all of this, he didn’t flinch or attempt to cover himself in any way, nor did he grab a towel from the rail, presumably because they were slightly out of reach.

Blue eyes. If she were maybe feeling whimsical, and she hardly ever was, she’d say they were like faded denim. ‘Sorry … I wasn’t expecting anyone to be in here,’ Kate said, leaving his hand suspended in mid-air. When he started to grin, she retreated back into the hall and struggled to pull the door shut. It didn’t fully close because the wood was warped, like most of the other doors, but she made heavy weather of turning the sign round to “engaged”. When she and Greg had become engaged, they’d bought a sign like that, for fun. For a while, Kate had hung it over the bedroom door until it became a nuisance, and then eventually it went to the charity shop. The charity shop would be filled to the rafters with all the stuff she’d packed up from the house, all of Greg’s cycling gear and magazines, but she’d had to do it. After some space away from the house, she could go back in there and re-decorate.

Or perhaps she wouldn’t, maybe it was time to sell it and move on.

Jan has three PDF review copies of Silver Rain to give away to the first three people to fill in the comments box below. All Jan asks is that prospective reviewers read the description first and make a considered decision as to whether the novel is likely to appeal. The central characters are in their fifties, the setting is mostly rural and the themes are contemporary. (There is sexual content but nothing graphic, and there are some four-letter words).

Want to find out more about Jan and her writing?

To have future posts delivered directly to your in-box, visit the sidebar on the right and subscribe to my blog, or to find out about new releases, competitions and freebies, subscribe to my newsletter and grab your free copy of my novel. I Stopped Time.