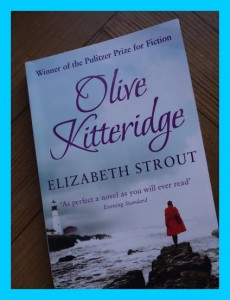 James Naughtie is up against it. Not only is there a very loud demonstration taking place outside the building of the BBC, but he has a bad cold. ‘Your country gave this to me!’ he tells Pulitzer prizewinning author, Elizabeth Strout. ‘Oh, well,’ she shrugs, unapologetic, and in this way she is rather like her character, Olive Kitteridge.

First things first. James Naughtie wants to pin the author down. Is Olive Kitteridge a collection of inter-linking short stories or it is a novel? ‘I think of it as a book,’ replies Strout, which is as sensible and concise as answer as the question deserves. It is whatever the reader wants it to be. A novel whose segments may be considered to be chapters, or individual short stories, in which the most obvious links are a retired school teacher named Olive Kitteridge, the town of Crosby, Maine, and a series of strikingly decisive moments in the lives of its townsfolk.

Strout is a slow writer. She references one story (or chapter) which took her only three to four months to write, saying that this was ‘good for her’. The last page came early in the writing process. ‘And I didn’t lose it,’ she adds, something that might easily have happened as she writes entirely by hand.

We first meet Olive through the eyes of her husband, Henry, and then through past and present members of the coastal community. (Maine has proved to be a fertile backdrop for fiction). In some chapters, Olive is very much in the background. She is observed by a piano player walking towards the restaurant of the Warehouse Bar and Grill on the arm of her affable husband. Attending a concert of classical music at Christmas-time in church, she draws the comment, ‘How can he (meaning her husband, Henry) stand her?’ And yet, she is remembered as the teacher who was feared by most pupils, but who once said something that really made Julie Harwood think.

Aging, suicide, anorexia, a shooting accident, a gun-point hold-up: all these things should be a recipe for depressing reading, but that isn’t the case. ‘I’m so glad you said that,’ says Strout. In fact, when Strout’s mother first read the book, her reaction was that it was funny. Later, standing in the queue to have my book signed, I learn that Strout practised stand-up comedy as part of the process of ‘discovering her voice’. She found it terrifying. But like all great books, this one packs an emotional punch. 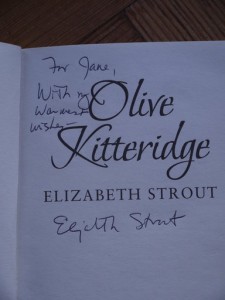 It isn’t until ‘chapter’ four that we meet Olive in person. Strout says that she is a camera panning in on the residents of each house, one of which bears a resemblance to the house on the dirt road that she grew up in. Naughtie asks how many points of view are too many. Strout replies that she uses as many as she thinks the reader will be able to cope with. ‘And which reader is that?’ he presses. ‘Oh, I have a very specific reader in mind.’ There is not a single person in the room who doesn’t want that reader to be them.

When asked what the essential quality for a character is, Strout doesn’t hesitate. ‘Authenticity. My characters are very honest.’ And so she allows them to suffer moments of excruciating embarrassment, like the time Olive returns from a trip out and discovers that she has ice cream all over her blouse. She imagines that she sat in the restaurant with ice cream dripping down her front and is furious that her son didn’t think to tell her.

‘I’m interested in all those little ripples that we all live with. And I think that if one gets a truthful emotion down, or a truthful something down, it is timeless.’

The difficulty with attending the recording of a radio show is that it is not a discussion. When we have something to ask, like primary-school children we shoot our hands into the air (‘Me, me, me!’) and prat that Jim Naughtie will pick us before the conversation moves on. While others suggest that the book is chiefly about Olive’s relationship with her son, I want to disagree in the strongest terms. For me, the entire essence of Olive is something mentioned only in passing: her father’s suicide. How he said one evening that he was thinking of doing away with himself and she did what many of us living our busy lives would have done. She offered a few small words of comfort but, in doing so, dismissed him. ‘The wrong response, as it turned out’. To me, this moment erased everything that had gone before. We meet Olive in middle age. There are no flashbacks to her childhood; few to her life as a young woman. When it is my turn to speak, I put this to Strout and she seems pleased with the observation, but says, no, she didn’t ever imagine Olive as a child.

Economy and subtlety are the keys to Elizabeth Strout’s writing. When asked about her style, she says that she particularly enjoys the process of cutting. We have the real sense that the writing didn’t simply arrive but has been scrutinised and chipped away at. Almost sculpted.

Olive Kitteridge is a clearly character some members of her small-town community find thoroughly unlikable. A mass of contradictions, she can be abrasive with her husband, disparaging to her husband’s friends (my neighbour particularly enjoyed how Olive served guests her husband invited to dinner a main course of baked beans), but she can reach out to total strangers if she senses they’re in need. Elizabeth Strout says that she decided to ‘let Olive be Olive’, but what constantly surprises her is how many women tell her that they are Olive. ‘Why would you want to admit to that?’

For me, the answer is obvious. There is a wonderful scene at her son Christopher’s wedding when Olive goes into his bedroom to put her feet up. Until this moment she thought that her new daughter-in-law, Dr. Sue, is a positive person who will be good for her son. But then Olive overhears Dr. Sue making a disparaging remark about her dress (something flowery she made herself and was rather pleased with the way it had turned out). She is gripped by a violent urge to take a black marker and scrawl all over the new pale blue bed cover. Most of us would enjoy the image and stop there, knowing that if we acted we might be found out. But Strout lets Olive be Olive. She takes one of her daughter-in-law’s bras, uses the black marker on the sleeve of a beige jumper that won’t be worn until autumn and then folds it perfectly again. Finally, she pilfers one of a pair of favourite shoes. Olive isn’t a person who ever takes insults lying down.

Listen to past episodes of Bookclub here.

Apply to attend a recording here.

A Funeral for an Owl is currently free. Hop over to the book page for all your download options.