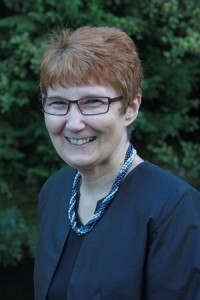 Today, I’m delighted to welcome Wendy. H Jones to Virtual Book Club, an interview series in which I put questions to authors about the books they would like your book club to read. If you’d like to pose a question, you’ll have the opportunity to do so at the end. Wendy is also giving away a copy of her book, so don’t forget to comment!

Wendy has led a varied and adventurous life. Her love for adventure led to her joining the Royal Navy to undertake nurse training. After six years in the Navy she joined the Army where she served as an Officer for a further seventeen years. This took her all over the world including Europe, the Middle East and the Far East. Much of her spare time is now spent travelling around the UK, and lands much further afield. As well as nursing Wendy also worked for many years in Academia. This led to publication in academic textbooks and journals.

The book we’ll be discussing today is  Killer’s Countdown, her first novel and the first book in the Shona McKenzie Mystery series.

Dead Women. A Ruthless Killer. A Detective with something to prove.

Q: Wendy, perhaps you could start by telling is how you came to be a writer.

I have always been a passionate reader. At the age of seven I was given a typewriter for Christmas and started writing stories. My career took me into nursing and the Military, then ultimately academia. I wrote chapters in textbooks and articles for academic journals. I then became very ill and this made me rethink what I wanted to do with my life. I moved back to Dundee and started to write my first novel, Killer’s Countdown. I now write full time and love every minute of it.

I don’t have any specific qualifications. However, I have done as much as I can to develop and broaden my skill as a writer. This includes reading books on writing, attending writing workshops with experienced crime writers and undertaking online writing courses. What I do bring to the writing process is a lifelong passion for reading crime books, and a thirst for words and how they can be shaped to bring enjoyment.

Q: We already know that you’re a crime writer, but what can readers expect?

My books are part of the Tartan Noir movement of Scottish Writing. This means they’re dark crime books. However, they are different in that they show both dark and light. There are some moments of comedy as a contrast to the more evil aspects of the book. DI Shona McKenzie, my protagonist, has been described as feisty, funny, sharp and doesn’t suffer fools gladly, so she’s an all-round character with a good sense of humour. This is not at the expense of the crime aspect which can at times be gory. 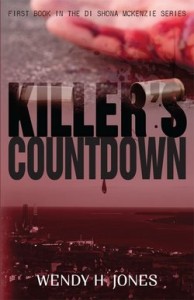 Click here to read reviews, look inside and buy

Q: Where is Killer’s Countdown set and how did you decide on its setting?

The books in the DI Shona McKenzie Mysteries are set in Dundee, Scotland. I decided to set them in Dundee as it is a City with which I am familiar. It also meant that I could give readers a flavour of Scotland and its culture. The setting is an important part of the story, particularly in light of the Tartan Noir genre.

Q: Although the series is set locally, I know you have a readership in other countries.

Yes, my books sell extremely well in the UK, USA, Australia and Canada. I have also sold quite a few books in Italy, Germany, France, Spain and the Netherlands. Readers in South Africa and Africa have also contacted me to say how much they have enjoyed them.

One of the big areas for me was Scottish Law. Although I taught Medical Law, this was in England. I was unfamiliar with the intricacies of Scottish Law. Fortunately Tayside Police are very helpful and will answer any question that is sent to them. My local Police Sergeant also came round to my house and spent a very pleasant few hours giving me advice and drinking tea. He then told me to use as much poetic licence as I wanted. The basic advice was if you write about exactly what we do everyone will die of boredom. However, the laws under which people are charged are completely different so I need to make sure I get that right. Anyone heard of Plagium? Well, that’s the Scottish term for theft of a child. 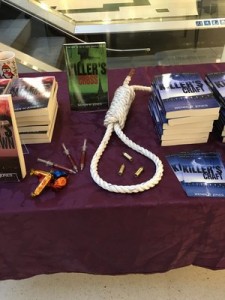 Q: What is it about Killer’s Countdown that makes it particularly suitable for book clubs?

It’s already been read by a number of book clubs who report that it’s led to spirited debate. Because the book has two narrative strands, it gives both the killer’s and the police perspective. This allows the reader to see into the psyche of the killer and what motivates them. It allows for discussion of how someone becomes evil. At the same time, it also allows a discussion about police procedures and why they acted in the way they did. Readers liked this, so I have continued it into the next two books – Killer’s Craft and Killer’s Cross.

When writing Scottish Characters I think they need to reflect both Scotland and real life. I use Scottish names where possible, but not everyone in Scotland is named this way. Shona McKenzie was originally called Shona McLeod but this had to be changed for various reasons. It took weeks to alight on a suitable surname. Names also need to be age appropriate bearing in mind what was popular when a character was born. I also need to use the Anglicized versions of Scottish names. Many readers would not know how to pronounce Ruairidh but they do know how to pronounce Rory.

Q: I responded (at length) to a derogatory newspaper article today about self-publishing. As a self-publisher, what do you think its greatest advantage is?

I don’t see self and traditional publishing as being mutually exclusive, but two sides of the same coin. I made the decision to become an independent author because I like the overall sense of being able to control what I do and when I do it. It gives me a great sense of satisfaction. However, I still think traditional publishing is important and that there are many people who would prefer, and actually be better off going down that route.

Q: Which do you market as a brand – yourself or your published works?

The short answer is both. I market myself as an author and my writing name, Wendy H. Jones is a brand. However, the DI Shona McKenzie Mysteries is also a brand name. So, I use both, which leads to greater exposure. I promote as widely as possible and in as many ways as possible. I try to use social media in a fun way, such as posting photos of me doing events, or my books on shelves, rather than ‘buy my book’. I’ve given talks in libraries, to women’s groups, continuing education groups and a Primary School. The school talk was great fun as the children were fascinated by that fact I got to kill people for a living. All my books were launched in Waterstone’s Dundee and I have done book signings in bookshops, coffee shops, cafes, restaurants, fetes and Shopping centres. In fact I’m everywhere. It is so much fun and I love it. 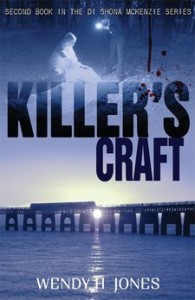 Click here to read reviews, look inside and buy

Q: Who designed your book covers and what brief did you give them?

My books were professionally produced by the highly talented Cathy Helms of Avalon Graphics. Although Cathy is in America she knew immediately what was needed to show a sense of place. I give her a very light brief and she has produced outstanding covers based on this. For example I told her the books were set in Dundee, Scotland, and then a couple of lines about what the book was about. On each cover the bottom half is a picture of Dundee and the top picture part of what the book is about.

Q: And finally, what are you working on at the moment?

I am editing the fourth book in the series, Killer’s Cut, and also a book on Marketing and Promotion for Writers. I am still working on a title for this. I am also planning out future books in the DI Shona McKenzie Mysteries and jotting down ideas for a new crime series.

You’ve very generously offered a copy of Killer’s Countdown to the first reader who replies in the comments with the answer to the question, What is Dundee most famous for? (This will be paperback or ebook in the UK, but ebook anywhere else in the world.)

Want to find out more about Wendy?