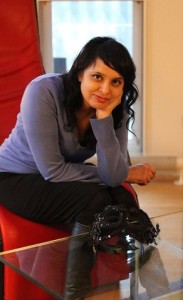 Tackling the escalators in an underground station while carrying a laptop bag and a suitcase full of books in Friday evening rush hour is not recommended under ordinary circumstance. But ordinary circumstances these were not. On one of the hottest evenings of the year to date, I left my day-job behind and wove my way unsteadily through the crush, to take part in Novel London’s Contemporary Fiction evening.

Novel London is the brainchild of author Safeena Chaudhry (pictured). Having gone to many short story and poetry events, she noticed a gap in offerings on the literary scene. There was no event for writers to showcase the first chapters of their new novels. Drawing on her experience of organising a Literature Festival at Middlesex University and her training as a camera operator and editor, the idea is simple: themed evenings, central London locations, authors reading their first chapters to a live audience. If the audience like what they hear, they get to meet and support the author by buying the book, and the journey continues. The evenings have an ongoing legacy as readings are recorded and aired on Novel London’s YouTube channel.

Arriving at Waterstones, Covent Garden, I was greeted by actor, author and professional voice coach, Norma Cohen, who was putting Young Adult author Fiona Linday through her paces. Fiona was clearly in her element. She explained to me later how, working with children to support literacy in schools, she knows exactly what is required to keep a tricky audience engaged. I was there to read from my forthcoming release My Counterfeit Self, which tells the story of a bohemian poet activist, the men she loves and the causes she supports. In my book, my main character Lucy expresses concern about her ability to do precisely that:

‘Lucy had only ever imagined that single misfit she wanted to reach out to. The sheaf of poems trembled in her hand as she realised she had only small things – her voice, her words – to stop the audience wandering off to the bar.’

Fortunately for the participants, helping people make the most of their voices and their words is where Norma excels. She encouraged us to engage with every member of the audience – and since the audience would be sitting in a semicircle, this meant moving about and making eye contact. She was very encouraging – in fact, she was extremely taken with William Logan’s voice. When it came to my turn, Norma was happy with my general delivery, but suggested places where I should pause to give the words time to sink in, and words where greater inflection was required. She wanted me to start the chapter with a shout – quite an intimidating prospect!

As it progressed, the practice session become interactive. Norma had us each read lines from our first chapters in turn, which gave us the opportunity to compare delivery techniques and had the effect of making us match rather than compete with each other’s voices. Finally, before the audience arrived, she put us through some relaxation exercises – to which I added a glass of white wine, for good measure.

Norma also acted as compere for the evening . This, I felt, worked extremely well as a personal relationship had been established. I felt that bit more confident to have her introduce me. Whilst I didn’t remember every one of her suggestions, I did notice a marked difference in my delivery. Focusing on the audience, I was barely aware of the first camera I had been so worried about. I didn’t even notice that there was a second! (If I had a hat, I would take it off to Marina Uzcategui, freelance video editor, camera operator and documentary filmmaker.)

Fiona’s aim is to create fiction for youth in a voice that reflects their value systems but adds hope around their issues. After volunteering in a day hospice and child bereavement centre, she wrote a teen novel covering family bereavement, called, Get Over It, which was published by Onwards and Upwards publishers.

She said about the event, “As a writer from the East Midlands I was delighted to be invited to read the first chapter of my New Adult manuscript called DisGrace. Alongside two other able writers I was coached by an experienced performer, Norma Cohen, then read to an attentive audience.”

“The video is available as an ideal boost to help pitch the novel to literary agents and publishers. I’m trusting that listeners will share my fictional attempts to give students a heads up about the potential dangers out there.

A potential publisher might be intrigued to be assured of the teenage protagonist’s safety during her ambitious but risky adventures.”

William Logan – “I like how the event showcases first chapters, which are a great litmus test for any work of fiction.”

“I’m working on the second draft of my novel, Gothengau: Fourth Reich Rising, and keep my eye on opportunities to improve or expose it to an audience wider than online critiquers. That’s how I found about Novel London, through a MeetUp group targeted at writers.  I was also honoured to be reading together with published and prize-winning authors since I have neither of those to my name yet. Since I received interest from literary agents, my muse-editor wife and I have put some loving care into the opening of the novel, until I think that is the best I can do without professional input.

Despite being a late addition to the line-up, I managed to get some friends and a fan to turn up. The bookshop’s basement made a perfect backdrop to the readings, and I thought the picture taken of me in the History section, was particularly appropriate given my novel’s “what-if” founding tenet.

Never having done a public reading before, but being a confident chap, I was happy to see Norma Cohen there, coaching each of us about our pace, eye contact, and maintaining tone of voice to the last word in the sentence.

Due to my height, Safeena put me on first to make it easier with the camera set-up. I quickly overcame any nerves and went through the reading, gestures and all. I might have been difficult to follow for some, but not for the two writers giving voice to their work after me.”

“A few days later, Safeena posted a wonderful recording of the occasion which used two cameras edited together and a lovely header. Thanks, Safeena, I’m very glad of the exposure!

Safeena puts in a wonderful contribution to London’s cultural make-up. Perhaps a mention in Time Out could be in order?”

If you are an author and would like to take part, please refer to the Submissions guidelines.