Do Fictional Characters Have Ghosts? 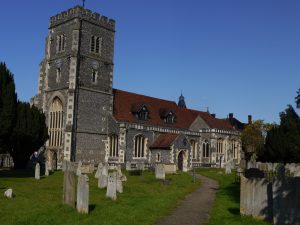 St Mary’s Church in Beddington is normally locked during the week, but one Thursday lunchtime – my mother-in-law’s tenth anniversary, in fact – I found the doors open, and so stepped inside and lit a candle. But at the same time as thinking how much Maureen would have liked the building (pointing out that that would never have allowed her to have ‘Fat-Bottomed Girls’ played at her funeral, as she did), I was aware of two other presences: Jim and Aimee.

Who are Jim and Aimee? They’re old friends of mine. People I have written into the landscape of my life.

‘Jogging on the spot, Jim waited for a break in the traffic to cross the road dissecting the two ponds. Turning right at an iron-gated entrance in a red-brick wall, he ran over a stone bridge. Here, coots swam among mallards and gulls, their nests small islands of sticks. Batches of chicks, small balls of squeaking black fluff with red faces, struggled to keep up with Brylcreemed parents. Jim’s footfalls displaced the inevitable pigeons. They lifted and settled to purr and coo elsewhere, heads bobbing up and down to a strange rhythm.

A grey heron stood in the shallows at the top of a small waterfall. Whilst mallards darted about, scooping up crusts thrown inaccurately overarm by an anorak-trussed toddler, he alone was watchful, knowing he only had to extend his neck and the food was his. No doubt it was a different heron, but this had been Aimee’s offering. She’d grabbed his arm, whispering, “He’s here!” Grinning, the gap in her front teeth was displayed. “You’re impressed, admit it.”

They were close enough to see individual feathers, his grey crown topped with white, and the black on white of his mottled neck, the dark plumes of his chest spiky in the flow of water. Impressive but ugly, a misfit in the world of Sunday picnics and after-school trips to the swings. He was a loner: Jim’s kind of bird.

“Swapsies.” She’d hugged herself. “My heron for your owl.” At the time, he hadn’t been aware that she considered a bargain had been struck. They never even shook on it.’ 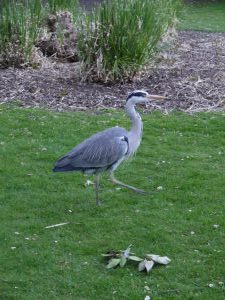 My personal geography already has many stratas. I’ll let Ron explain. (From An Unknown Woman)

‘There was something transportative about living in the same city all of your life; walking around familiar geography, knee-deep in the history of the place. And superimposed over a street map carried both inside and outside his head (the then and the now), were the milestones of his own life. Now he was older – with less to look forward to, he supposed – Ron spent a great deal of time in the past. In a single half hour, he might be a child crying in a damp cellar, clasped to his mother’s chest; a child of five sitting on the clean-swept step of his grandmother’s terraced house, while the adults crammed themselves into the front parlour, discussing things that didn’t concern him. He might be a school-leaver, discovering the pleasure of smoking illicit ciggies on park benches (illicit because he’d bought them with coins dropped into his cap while he pretended to be collecting for the Sailors’ Home).

Once, an office worker stopped and asked for a light. Before Ron could reach for his matches, she scooped back her hair, and bent down to touch the end of her cigarette to his, her blouse falling open as the embers flared. A quick thank you, smoke coiling in his face and him left with a grin that made his jaw ache all afternoon.

I expect my own characters to leave a mark on my personal landscape. What was fascinating to me was that I found a similar awareness of characters from a book I was deeply immersed in when visiting the book’s setting. Last week I wrote about my recent literary pilgrimage to Haweswater in Cumbria. How the people I mourned for when I found the ruins of the drowned village of Mardale weren’t the valley’s real-life inhabitants, but characters from a novel by Sarah Hall. And it got me thinking: we write our characters into being, but can fictional characters have ghosts?

Of course, your answer will depend on what you understand to mean by a ‘ghost’. If it is a certain energy, a sense of a presence, and if that sense is associated with a particular location, then you may well say ‘yes’. 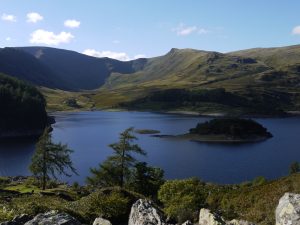 In the case of Haweswater, the issue was complicated. Before the valley was flooded, parishioners who had been buried in the graveyard of the tiny church of All Saints were reinterred. It is easy to imagine that they would have wished to remain the valley they called home. I may well have sensed something or someone and simply called it by the names that were known to me.

Increasingly, however, literary tours are big business for tourism. Perhaps it’s no surprise that – as I witnessed in Edinburgh this summer – one of the most popular tours was the Harry Potter Trail. It was scouting for the book’s locations that had brought tourists halfway across the globe. “What did you come looking for?” I asked. “Oh, I don’t know, a little magic,” one said. “Not J K Rowling?” I asked. “No!” (They seemed genuinely put out by this suggestion.) “We come for Harry.” I suppose that after seeing Harry grow up through the passage of seven novels, you may come to feel protective about him. 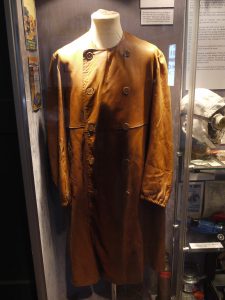 As I go about my daily life, I might visit Brooklands Motor Museum with my partner Matt, an avid F1 fan, and see Kingdom Hastings with his head under the bonnet of his latest prototype. I park in Shere at the beginning of one of my favourite walks in the Surrey Hills, and see Sir James Hastings crossing the square from his home, past the war memorial, to the pub he drank in, his elderly German Shepherd called Isambard in tow. (I Stopped Time). I take a short cut through Honeywood Walk in Carshalton and see the tree that caused the collapse of the wall that Judy Jones was buried under (These Fragile Things). I cross the small wooden bridge at the foot of the waterfall in Grove Park and Aimee swirls round, elbows on the rail. Or I go to St Helier Hospital for an X-ray and find Ayisha, lost in a corridor, looking for someone to ask for directions. (A Funeral for an Owl). I encounter a pelican in St James’s Park and share Belinda’s delight, or come across a lone stag when out walking in Richmond Park, and somehow it is the stag that blocked Alison’s path, looking her straight in the eye (An Unchoreographed Life). 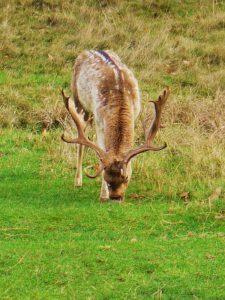 We live with our characters so long that they are kin to us. In a way, we know them better than friends and family, because we have seen through their eyes and know their every thought. Every single one of these things is as real to me as my own memories, because in editing the novels I have relived these moments time and time again. These are my ghosts.

But it seems this doesn’t only apply to authors. Now, a new study confirms that one fifth of readers say that they find characters from novels slipping into their everyday lives. So, in answer to the question, yes, fictional characters do have ghosts!

PS: My Counterfeit Self, Jane’s seventh novel, was released 1st October, and is now available to buy: https://books2read.com/u/4AgQdK 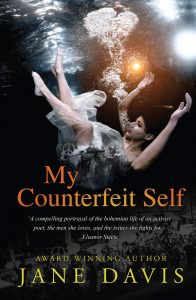 From the award-winning author of Half-truths and White Lies, comes an emotional story of hidden identities, complicated passions and tangled truths… ‘A compelling portrayal of the bohemian life of an activist poet, the men she loves, and the issues she fights for.’ Eleanor Steele, ‘Completely gripping, superbly written and skilfully woven together, I can’t recommend My Counterfeit Self highly enough.’ ~ Isabel Wolff, author of Ghostwritten.

Written on October 4, 2016 at 11:20 am, by Jane Davis
Categories: Homepage, In-depth, My Books, Out and About   |   Tags: A Funeral for an Owl, An Unchoreographed Life, An Unknown Woman, behind the book, Creative Writing, Do Fictional Characters have ghosts?, Writing life