Talking about his latest release, The Purple Shadow 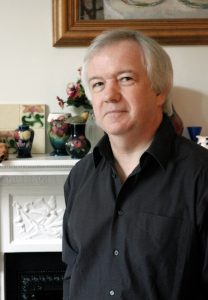 Today, I’m delighted to welcome Christopher Bowden to Virtual Book Club, an interview series in which I put questions to authors about the books they’d like to persuade your club to read. If you want to pose a question of your own, you’ll have the opportunity to do so at the end.

Christopher lives in south London.  He is the author of five novels, each with a colour theme.  The Purple Shadow is the latest.  His previous books have been praised variously by Andrew Marr, Julian Fellowes, Sir Derek Jacobi, and Shena Mackay. Of his third novel, The Red House, Sir Derek said, “Very entertaining, cleverly constructed and expertly paced.  I thoroughly enjoyed it.”

Christopher has given talks about his books to a number of reading groups and at local festivals – most recently, at the Streatham Festival in July 2016.

Q: Christopher, can I start by asking, why do you write?

Self-satisfaction, in the best sense – the fulfilment that comes from the creative process.  The use of language, the creation of images, people, and places, the development of the stories and the underpinning themes, being drawn in to worlds of my own making and hoping that readers will be too.

Q: Have you always felt driven to write or was there a particular trigger?

I spent many years drafting as part of my former day job as a civil servant.  But that was at the behest of others.  Increasingly, I felt the need to write more creatively, to write on my own account.  I have read many novels by other people but wanted to try my hand at producing some myself.  The immediate trigger was the combination of a nagging idea that would not go away (the germ of what became The Blue Book) and the opportunity to do something about it by taking a career break.  I did go back to work for a while but eventually took early retirement to give me the time and space to focus on what I really wanted to do.

Q: What is it about The Purple Shadow that makes it particularly suitable for book clubs?

The book is set in Paris and London – but mainly Paris –  with glimpses of the film and theatre worlds of the 1930s and the art world of today.  I think readers will enjoy the evocation of time and place and the issues the novel raises about the motivation of the characters and what really happened in Paris before the war.  Why, for example, does Colin Mallory feel compelled to find out more about the portrait of Sylvie Charlot he sees in a Marais apartment, despite advice to leave well alone, how far is he in control of events, why was the portrait hidden for many years after it was painted, why are people reluctant to talk about it? 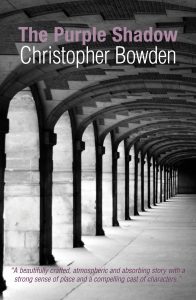 In the years before the war, Sylvie Charlot was a leading light in Paris fashion with many friends among musicians, artists and writers. Now she is largely forgotten. Spending time in Paris during a break in his acting career, Colin Mallory sees a striking portrait of Sylvie. Some think it is a late work by Edouard Vuillard but there is no signature or documentary evidence to support this view. The picture has some unusual qualities, not least the presence of a shadow of something that cannot be seen…

Q: How did you decide on the Paris setting?

My third novel, The Red House, began and ended in the city but was set largely elsewhere.  Some readers said they would have liked more about Paris so I hope they will enjoy The Purple Shadow.  And like The Red House, it features Colin Mallory, in Paris with his partner Bryony as actors at the Théâtre Marivaux. After the play folds and Bryony takes up a film role abroad, Colin spends time exploring the city on foot, as I have many times myself.  We are both flâneurs.  The focus of the story is on the Marais and Belleville but other parts appear too.

The book was a good excuse to go back to Paris.  Everywhere Colin goes I have been too, apart from one or two made-up places inspired by real ones.  I had to do a fair amount of research about the artist Édouard Vuillard, who may or may not have painted the portrait of Sylvie Charlot, and about the theatre, film and fashion worlds of the 1930s, with a brief foray into life in Paris during the Occupation.

The title actually came first.  It struck me as having a lot of possibilities and I had the idea of a painting in which there is a shadow but nothing there to cast it.  Was the picture once larger?  But, if so, why should it have been cut down and what happened to the rest of it?

Both.  The Purple Shadow is, I think, a very visual book, as are my previous ones.  But, like them, the story is underpinned by various themes and ideas that are developed and explored as the novel unfolds. In this case, although the image of a shadow in a painting kick-starts the process, the book is ultimately about the enduring nature of love and the possibility of reconciliation after many years of separation – but to say more would give the game away!

Q: Where does the story fit in with the rest of your work?

The title continues the colour approach of the previous ones.  The first three covered the primary colours.  I am now on the secondaries.  After The Green Door, and not feeling ready for orange, I went for purple.  The novels are free-standing but there are some common themes, characters and places.  Like the others, The Purple Shadow involves a search stimulated by something lost or found unexpectedly (in this instance, the portrait of Sylvie Charlot) but the story is quite different.  We meet some people from the other books and revisit some old haunts – and are introduced to many new ones too. 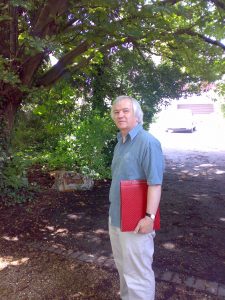 Q: Maggie O’Farrell says, ‘The way I see it, the past and the present are not separate.  The present is the past amended, particularly in the way we apprehend it, our memories and nuances.’  Is that something that you explore in your novel?

I agree! People and places are shaped by what has gone before.  But there may be differing views, understandings or memories of what actually happened, not least where the ‘truth’ has been massaged or suppressed. The ambiguity of the past is quite fruitful territory for a novelist.  In my books, discoveries about the past influence the present and thus the future too.  The Purple Shadow takes this forward in ways particular to the story and the people involved.

Q: Do you always know the ending to your story when you put pen to paper?

I roughed out the plot of my first novel (The Blue Book) from start to finish before I got going on the writing.  I have done this progressively less over the years so that my approach now is very much an organic one.  I need some ideas about what, who and where before putting pen to paper but, after that, the story develops in the writing.  I don’t know what will happen, let alone the ending, and finding out is as enjoyable for me as I hope it is for the reader.  I go with the flow, but keep it under control.

Q: Can you remember when you saw your first book on the shelves?

It was in Hatchards in Piccadilly, when the paperback fiction was downstairs.  I was next to Elizabeth Bowen and just along from William Boyd.  Quite a morale-boosting experience to be in such company. 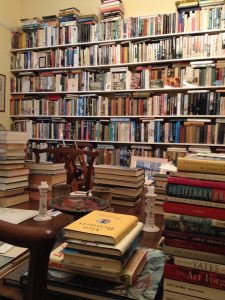 I hope they’ll enjoy the writing, the images and allusions, the characterisation and depiction of time and place, and perhaps reflect on the ideas explored in the story.  A review in The Lady magazine described The Green Door as “Subtly written but still a page-turner…”  I’d be happy if readers felt that about any of my books!

My website says more and people are very welcome to contact me through it.  I’d also be happy to visit book clubs in person to talk about The Purple Shadow or any of my other novels.

You might also like to enter my Goodreads Giveaway to win a copy of My Counterfeit Self.

See the giveaway details
at Goodreads.