The Night When the Trees Fell Down

Reflections on These Fragile Things and The Great Storm of 1987 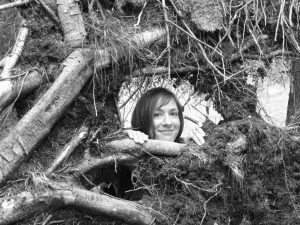 The Great Storm of 1987 was an unreal experience for me. It coincided with the last night of a holiday, a week during which I’d had no access to newspapers, television or radio. In South East England whirlwinds ravaged, but in Cornwall (two hundred and eighty miles due west), I was shaken awake. The house itself was moving. Suspecting an earthquake, I made the decision to hide under the blankets and must have eventually fallen back to sleep.

The following day I caught a coach back to Victoria, passing through scenes of devastation. Trees had fallen across roads, railway lines, taking down power cables and telephone lines. More than fifteen million were felled in a single night. I would turn twenty the following day and had no idea that a storm could cause chaos on that scale. It was said to be the worst damage in the United Kingdom since the Second World War, and the worst weather conditions for three hundred years.

“It took the country by surprise. Why?”

The Met office immediately announced a full investigation to discover why the hurricane wasn’t predicted. Famously, Michael Fish had reassured the British public the evening beforehand that reports of a hurricane were incorrect. https://www.youtube.com/watch?v=NnxjZ-aFkjs 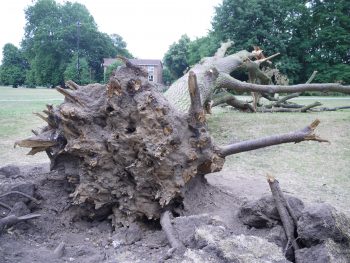 “Weathermen were caught with their forecasts down.”

On Monday morning I returned to my job in insurance claims at a firm of brokers. The phones didn’t stop ringing for weeks. That said, reports of damage were slow to arrive because telephone lines were down. I spent the following three years dealing with people whose lives and livelihoods had been wrecked, and so I listened to their stories. In 1987 the storm was called a one in every one hundred years occurrence. The demand for builders was so high that some claims were still outstanding when the next big storm struck – only three years later.

I don’t know why but, faced with buildings that had been toppled and injured people, it is the images of the trees that have stayed with me. Trees, that had stood tall for hundreds of years, toppled like dominos…

“Right from the first words, we have a feeling of instability and intimations of a disaster waiting to happen.” (from review of These Fragile Things) 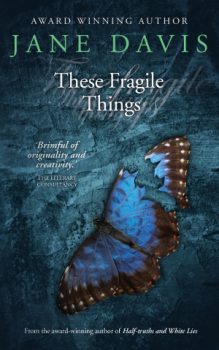 Life can change in a split second. And nothing you can do will stop it.

‘Davis is a phenomenal writer. And this is a coming of age story like no other. ‘ Compulsion Reads

‘Jumps out at you with a raw burst of originality.’ Lorraine Devon Wilke, Author

‘The author’s prose is extraordinary.’ ~ Julie, Amazon Reviewer, US

I always knew that the Great Storm was going to be at the climax of These Fragile Things. Here is an extract.

Downstairs, Graham opened the back door. The resistance of the handle in his hand told of the force of the storm. If he let go, he felt he might be lifted clean off his feet. But there was warmth in the air that brushed his face, and when he licked his lips they tasted of salt. The closest Graham had come to setting foot outside for some time – he couldn’t remember how long it was exactly – and every cell of his being felt energised. The wind had travelled a long way to get to them, and it would blow all the way to the Midlands before the night was through. The streetlights out, the sky was as dark as night skies Graham could remember as a boy, and there were stars dotted among the clouds. Only his neighbour’s security light above the garage remained, powered, no doubt, by the emergency generator he had often boasted about. His attention was drawn to movement just above ground level. Plastic pots raced the length and breadth of the garden, and glass shards and timber window frames danced. In the periphery of his vision a loose fence panel flapped one final time then broke free. Graham wasn’t afraid of the chaos – the awesome energy – although the world was noisier than he remembered before his retreat. There were police sirens and car alarms, a chorus of dogs barking in unison. Graham felt that Judy was very close by.

Behind him, Elaine was tugging at his elbow, cutting swathes through the darkness with the beam from a torch; pulling the door shut and locking it. “Come away from there, Graham. I want you to help me move the sofa away from the window in case the glass goes.”

Graham turned towards her, his face glowing. He wondered that she lacked his curiosity. Circling the walls of the room, the torchlight crossed his face and then returned to it. His eyes protested.

“What are you smiling at?” she demanded.

Graham tapped his chest near his heart three times. And he saw the glint of Elaine’s eyes as she said with mock-impatience, “I love you, too. Now get a move on!”

Already, by this time, Shanklin Pier had been reduced to driftwood. Already the side wall of a Dorset block of flats had collapsed, opening the building up like a dolls’ house. Already a roof had been torn clean off an old people’s home, leaving residents gaping at the planetarium above them – a curiously unscheduled entertainment – until someone came clapping their hands to break the spell, telling them it was time to get up.

On the Hampshire coast (where hurricanes hardly ever happen), a cargo ship stuck fast, driven onto the sand. Small boats ripped from their moorings were dropped onto pebbled beaches. A Cypriot bulk carrier sank somewhere just off the coast at Dover. The Home Office detention ship, The Earl William, carrying a cargo of terrified Tamil refugees, ran aground at Harwich.

A stone minaret came crashing through the roof of Brighton’s Royal Pavilion, damaging a priceless carpet. In the town of Hastings, a chimney stack collapsed inwards, pulling three storeys of a hotel after it. An elderly couple plunged through two floors: the man died; his wife’s fall was cushioned by a mattress. One guest was left staring into the abyss through a splintered hole in the floorboards, suspended from a door handle that he prayed would hold. Fifty people lost their homes when a caravan park near Folkestone was wrecked. Lorries were tossed about like matchbox toys.

None of these things should have happened in the south of England, where the weather was predictably dreary and damp, and sometimes there was a little fog. Where betting shops offering odds for a dry Wimbledon fortnight rarely had to pay out. Unsettled weather is what the nation dressed for, no pin-striped city businessman complete without his black umbrella, no child without a pair of red wellingtons. Leave the storms to the Highlands, the tornadoes to the Americas. They have a whole season dedicated to them, Hurricane Floyd just one in a long line.

It takes coincidences to create conditions in England capable of laying waste to over fifteen million trees. Warm air drifting eastwards (a father’s love for his daughter makes him fearful), unnaturally warm air surrounds the Bay of Biscay (a mother says, “Take what you need from my purse”), a cold front moves from Iceland in the direction of Iberia (a girl swings her hips and enters a telephone box). It was a once in every two hundred years occurrence. The insurance giants would claim it was another Act of God. Graham Jones was one of those who believed they were right.

And still the wind blew furiously. Chartwell, former home of Sir Winston Churchill, had its trees pulverised, trunks reduced to matchsticks. At Kew, the botanical gardens lost its most magnificent specimens. The trees, too, were merciless. One crushed a fire engine – a moving target responding to an emergency in Dorset – killing two of the crew who had thought their helmets would protect them. The trees fell on buildings. On power lines. On telephone lines. They blocked roads, these mighty oaks, horse chestnuts, sycamores. Severed branches gouged trenches out of carefully tended lawns. Tree-lined roads became giant domino sets. Parks that had previously promised hours of tree-climbing and the shelter of boyish dens would disappoint for decades to come. As the strength went out of the storm, trees that had balanced at precarious angles simply lay down and died.

In Streatham, ignoring the preservation order, the Great Storm toyed unpityingly with the branches of the tallest plane tree in London. No one knew quite how old Streatham’s tree was, but its arguments of ‘I was here first’ had pushed even its most ardent admirers to their limits.

When the wall was re-built, the semicircular section constructed to accommodate the trunk left room for growth, as you would when buying school uniform for a child. Apparently, still thinking of itself as a teenager, the tree had rebelled by entering a new growing phase. 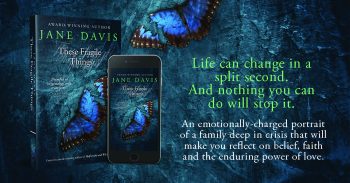 These Fragile Things is one of five of Jane’s ebooks that will be available for the very special price of 99p/99c from 17 – 23 October in celebration of her 50th birthday.

Written on October 10, 2017 at 1:50 pm, by Jane Davis
Categories: Blog, Homepage, In-depth, My Books   |   Tags: coming of age, Hurricane Floyd, Michael Fish, The Great Storm, The Great Storm Thirty Years on, These Fragile Things, Why I wrote the book