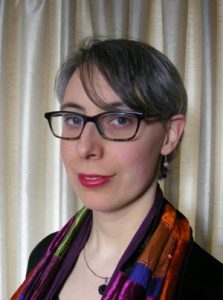 I’m delighted to welcome Kathleen Jowitt back to Virtual Book Club, my interview series that gives authors the opportunity to pitch their novels to your book club. This month I’m showcasing my fellow nominees for The Selfies Award 2019. I last interviewed Kathleen about her novel, Speak its Name, which was the first self-published novel ever to be shortlisted for the Betty Trask Award. It was also included in Qspirit’s Top 35 LGBTQ Christian Books of 2016 and was a finalist in the 2016 North Street Book Prize.

Kathleen was born in Winchester, UK, and grew up deep in the Welsh Marches and, subsequently, on the Isle of Wight. After completing her undergraduate degree in English Literature at the University of Exeter she moved to Guildford and found herself working for a major trade union. She now lives in Cambridge, works in London, and writes on the train.

Her follow-up, A Spoke in the Wheel tells the story of Ben Goddard, who is something of an embarrassment – as a cyclist, as an athlete, as a human being. And he knows it.

Now that he’s been exposed by a positive drugs test, his race wins and his work with disabled children mean nothing. He quits professional cycling in a hurry, sticks a pin in a map, and sets out to build a new life in a town where nobody knows who he is or what he’s done.

But when the first person he meets turns out to be a cycling fan, he finds out that it’s not going to be quite as easy as that.

Besides, Polly’s not just a cycling fan, she’s a former medical student with a chronic illness and strong opinions. Particularly when it comes to Ben Goddard…

Q: Before we discuss the book, I wonder if I can ask you to what extent you think self-publishing gives readers and writers greater freedom when it comes to what they read/write?

In theory, self-publishing offers a huge amount of freedom. What’s to stop you putting out a 500,000 word epic every six months? (Well, of course, your own self-respect, business sense, and good taste!) It all depends how seriously you want to take it, I suppose. I’m very serious about wanting to produce a high-quality book, but I don’t worry about whether I’m being sufficiently ‘commercial’.

I make no secret of the fact that I’m writing to please myself, and therefore I give myself the freedom to flit between genres and subject matter. If I’d ended up going for conventional publishing, my first book might have been published by a small press specialising in LGBT+ fiction… who would have no interest in this second one at all.

Q: What is the central conflict in A Spoke in the Wheel?

It’s the question of how (or, indeed, whether) Ben Goddard, a disgraced professional cyclist, can rehabilitate himself – and that’s as much in his own eyes as it is in the eyes of society. ‘Society’ in this case is represented by Polly and Vicki, the two cycling fans he ends up living with (‘Beggars can’t be choosers,’ as Polly remarks at once point), so the question is quite literally close to home. And of course he’s got to support himself along the way.

Q:How did you find that your use of first person narrative shaped the novel?

In this novel, at least, I found it was much easier to convey a sense of who my narrator actually was by using the first person. He’s not a maliciously unreliable narrator, but his perception of himself is a little out of step with reality. Writing in the first person allowed me to set up the contrast between what he thinks is going on and what the reader can see is actually going on. 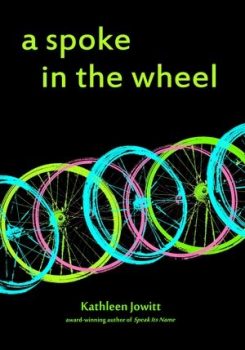 The first thing I saw was the wheelchair.

The first thing she saw was the doper.

“Very charming and compelling story, with an excellent and unusual premise. Frequently very funny as well as being skilfully written, this is an easy book to recommend.” ~ Amazon reviewer

Q: Can you tell us a little about the major areas you had to research?

Other than cycling, the obvious one is disability. My other main character suffers from myalgic encephalomyelitis (ME). I don’t have personal experience of either the level of athleticism required of a professional cyclist or physical disability, so I had to do a lot of research, both around the facts (what happens in the off-season? How would somebody go about picking up somebody else’s prescription?) and about what those experiences mean for people’s day-to-day life. I watched a lot of cycling – well, I’d have been doing that anyway. I found myself reading a lot of autobiographies by cyclists, and a lot of blogs by disability activists. I also got people who know more about the subject than I do to check the manuscript over.

Q: Are you looking to entertain or illuminate?

Both. I always want to get people thinking, to see a side of the story that perhaps they hadn’t considered before, but I want them to enjoy themselves too.

Q: Did you deliberately time the release of your book with the Giro d’Italia?

Yes! The cycling season kicks off early in the spring, but the ‘big name’ events are the three grand tours – the Giro d’Italia, the Tour de France, and the Vuelta a España. Timing the release for A Spoke In The Wheel to coincide with the Giro meant that I could take advantage of renewed interest in cycling on social media (and tie the ‘blog tour’ in with the ‘grand tour’!) – and then follow it up with more publicity during the other two tours.

Q: Do you think political statements belong in literature? Would you write a novel that was a political tract?

Politics always gets into my novels somehow. There’s an old truism that ‘the personal is political’ – but the political is personal, too. It impacts on people’s lives in ways that they’ve got no choice over, and that makes for an interesting source of conflict. Recently I saw somebody remark on Twitter that the trouble with the current trend for books about quirky cupcake bakeries is that they never consider the economic impact on the neighbourhood in which the quirky cupcake bakery opens, and it was about time someone did. That’s a book I’d love to read. I’d quite like to write it, but I don’t know enough about the business of baking… yet!

A straight-up political tract masquerading as a novel, however, would probably be very boring.

I’d agree – but I think that’s true of a lot of skills. I do a bit of tutoring in my day job, and the more I do the more I’ve come to understand that what I’m there to do is to equip people with the confidence to have a go. In the end, people have to find out for themselves what works for them. I know I did. 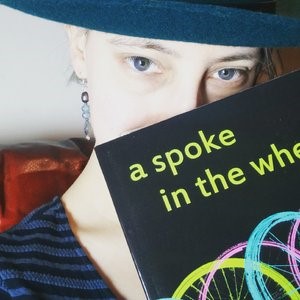 Q: Few authors can afford to give up the day job, but is yours a distraction or does it add another dimension to your writing?

This is going to be another ‘both/and’ answer! It does take up a lot of my time, particularly since I have to commute to London, but that in itself gives me a structure in which to write – I get loads done on the train! It also allows me to meet all sorts of interesting people and to do a little bit of travelling around the UK. In A Spoke In The Wheel, Ben ends up working in a hotel – a plot strand that probably wouldn’t have got in there if I hadn’t visited a few off-season seaside towns in the course of my job. And of course I’m extremely grateful to have a steady income, so that I can write at my own pace without worrying about when I’ve got to get the next book out.

Q: ‘Without chaos, there’s very little story to tell.’ What is the source of chaos in your story?

Ironically enough, it’s my characters’ uncertainty of income! Ben ends working two jobs on zero hours contracts, Polly is dependent on state disability benefits, and Vicki, their housemate, is working herself into the ground as an underpaid charity administrator. Of course any of of those is liable to be snatched away without notice: chaos is always one benefits sanction away. On the other side of the coin, there’s also the lure of fame and fortune, because it turns out that not everybody in the cycling world has forgotten about Ben…

Q: We want our fiction, like our lives, to end with revelation. Did you save a ‘big reveal’ for the close of the novel?

Sort of… Well, the reader can see it coming a mile off, but it’s a surprise to Ben! A few minor mysteries are cleared up; a few others aren’t; life goes on. Generally speaking, though, I was aiming more for the satisfaction of things working themselves out to their logical conclusion.

Want to know more about Kathleen and her fiction?