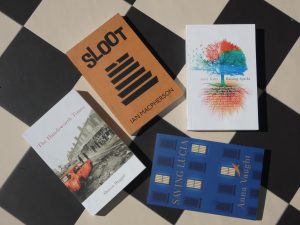 Recent headlines have suggested that 60% of independent publishers in the UK may be out of business by autumn as a result of the pandemic. I believe that these publishers, who put their love of literature before commercial considerations, are critical to the health of the UK publishing industry, nurturing talent and producing novels that might otherwise not see the light of day. To show my support, this month I have selected books published by husband and wife team, Bluemoose Books, whcih I ordered directly from their website. Why Bluemoose? Because I’ve come to trust their tastes. True to form, none of my choices disappointed.

Four fascinating characters on a flight of fantasy

Those marvellous people at Bluemoose Books have an uncanny knack for spotting the genius of quirky gems, and this novel is no exception. I began with no preconceptions, unsure if what I was reading was magical realism. It didn’t matter. I was quickly captivated by the strength of the writing and happy to ‘trust’ the book’s narrator, Lucia, daughter of James Joyce.

The cast of characters should be enough to temp you: together with Lucia, there is The Honourable Violet Gibson, whose 1926 attempt to assassinate Mussolini failed; Anna O, who helped Freud develop his theory of psychoanalysis because of what she herself called The Talking Care; finally Blanche Whittman, a patient at the Salpêtrière, Paris, known as the ‘Queen of the Hysterics’ and used by Charcot, then, one of the most famous doctors in the world, to demonstrate the effects of hypnosis.

The fact that our narrator is a resident of St Andrew’s psychiatric hospital means that she has the potential to be the ultimate unreliable witness. She is clearly struggling to manage her churning thoughts, obsessions and compulsions (this often disrupts the narrative), but there is also clarity of thought (the sanity within the madness), friendship and moments of sheer joy. Of the underlying questions the book explores, perhaps one of the most significant is who defines madness and who gets to judge that someone else is mad? Was Violet Gibson any madder than Mussolini, to say nothing of the medium who conducts the séance the four attend, for example? The most poignant question, however, that the four have to grapple with is why family and friends – the people they thought loved them, the people they trusted – have apparently abandoned them.

If the author had given me speech marks (and I do think the book needed them), I’d have been a very happy bunny indeed.

It is worth adding that this is a very interesting book to read during lockdown. (For those reading in the future, I mean the pandemic lockdown of 2020.) I read a quote this morning that seemed pertinent: “We all confront the parameters of our cage eventually. What we do when we reach those bars helps define us.” If Saving Lucia is about any one thing, it is about freeing yourself through the limitless power of the imagination, escapism in the truest sense.

Some of my favourite books are about writers (think Michael Chabon’s Wonder Boys). While reading, I made several comparisons with Less by Andrew Sean Greer, a comic novel about a failing writer. With Sloot, we have a stand-up-comedian-turned-writer, writing about (you guessed it) a stand-up-comedian-turned writer, except that this writer is not quite ready to relinquish his ego. As narrator, he cannot resist butting in and (occasionally) giving himself centre stage. Like an actor breaking the fourth wall (think Phoebe Waller-Bridge), he talks directly to the reader, and it is this rule-breaking style that gives Sloot many of its comedic moments. Some of my favourite touches were the footnotes.

And so to the plot. Hayden McGlynn (our stand-up comedian friend), has found that, by London standards, his brand of humour is past its sell by date, when he is called back to his native Dublin to attend the funeral of his Uncle Eddie. Already thinking about writing his big crime novel, he soon becomes convinced that Uncle Eddie’s demise wasn’t due to natural causes and, unable to interest the local garda, decides to solve the mystery himself.

I’m not sure if this is strictly a crime novel, but it isn’t pretending to do anything strictly. I hope the author won’t be insulted if I describe this book as a great palate cleanser. By that I mean that it would makes a welcome break between weighty tomes. In fact, I’d say that it’s the treat you should promise yourself after you’ve made it to the end of Hilary Mantel’s The Mirror and the Light.

The Handsworth Times by Sharon Duggal

Other contemporary novels use the 1980’s race riots at their climax. (Here, I’m thinking of Catriona Troth’s Ghost Town or Kit de Waal’s My Name is Leon.) The Handsworth Times kicks off with the Handsworth riot. Immediately the territory feels familiar. I grew up as one of five children and, like the Agarwal family in the novel, there were three girls and two boys. My father worked, my mother ran the household. I was a similar age to the Agarwal children in the 1980s. I lived in South London and, although I had no direct experience of the Brixton riots, I was in hospital for something unrelated and several people who were caught up in it were brought onto my ward. Not to mention the fact that on page 5 there is mention of the Finger of Fudge jingle, which my mother played recorder on!

The Handsworth Times is a portrait of a family trying to survive the two-year period after the death of eleven-year-old Billy, who was out on his bike when the riot broke out. The portraits the author paints of individuals isn’t a sympathetic one. Family members do not pull together in their grief. Mukesh is head of the household. Like his wife and children, we don’t know what drives him to drink or why he walks out of a job when unemployment is so high. He doesn’t talk about what is tormenting him and, even if he were able to, bereavement counselling and mental health services were non-existent in the 80s. Usha, the mother, appears by today’s standards to be weak, obsessed as she is by cleaning, never asking any of her children to help with the housework and never pulling them up when they are rude or take her for granted. The oldest daughter Nina’s behaviour seems callous when, in the immediate aftermath of brother Billy’s death, she leaves the family home to take up a university place.

But this is a novel about things that families do not talk about. About sorrows that cannot be spoken of, and of secrets that must be kept. It is impossible for middle daughter Kamesh to admit that she’s attracted to girls. It is impossible for youngest daughter Anila to admit that, after attending a meeting of the Handsworth Youth, she was flattered by charismatic Kash’s attention, not realising what his intentions were until it was too late. And we do not know how alone the only remaining son Ravi feels. (His sisters have each other but, alone in the bedroom he shared with Billy, he has no one.)

When revelations come, they are skilfully understated, so that the reader understands how much effort they take and exactly what they cost. By the end of the novel, the seemingly dysfunctional Agarwal family had started to feel like family.

My only criticism of the book is that, given its explosive starting-point, I expected more racial tension. (Don’t get me wrong, there is casual racism in abundance, but head-to-heads are rare.) Only in the last chapter are we are told that Handsworth is an area ‘full of different people living side by side’ and ‘we all get on alright, really.’

The author leaves us with Usha taking a chair into the garden to escape her children’s bickering. It is a moment, if not exactly of optimism, then a real sense that life goes on, and will continue to do so.