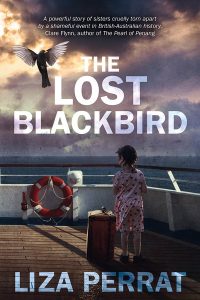 It’s been a while (launching a new book and working for real money) but today I’m delighted to welcome Liza Perratt to Virtual Book Club, my author interview series which gives authors the opportunity to pitch their books to your book club, be it virtual or real.

Liza grew up in Australia, working as a general nurse and midwife. She has now been living in France for twenty-seven years, where she works as a part-time medical translator and a novelist. I adored her historical fiction, The Bone Angel series, based in fact, but for her recent writing, including her new release, Liza has delved into far more recent episodes of history – 20th century scandals.

Q: What is it about The Lost Blackbird that you feel makes it particularly suitable for book clubs?

It’s based on a true-life scandal, of children being shipped from Britain to populate the colonies. They were supposedly going to a better life, but the tragic reality is that many were treated as slaves, suffering all forms of abuse, half-starved and denied a proper education. The fact that this latter 20th century scandal went on for many years, and was only exposed relatively recently, could provide much matter for debate amongst readers.

Winning the WritersWeekly.com 24-Hour Short Story Contest. The topic was:

“Double, double, toil and trouble, fire burn and cauldron bubble.” That was how witches did it, according to Shakespeare. But now she was investigating modern witchcraft and had found a woman who agreed to take her to a secret meeting of a real coven nearby. “This should be a hoot!” she whispered to herself. “What to wear, what to wear?”

When I began writing, I realised fairly quickly that if you’re to have any chance of earning a living from it, you need to have written a load of fabulous books, to be a bit lucky, and have a lot of time for marketing. I don’t have any of these at the moment, though I am slowly building up the number of books, so I’m glad of my part-time job that pays the mortgage. Of course, I would be happier if I could write full time, but I can’t see that happening until retirement. If ever!

Q: You generally write in the genre of historical fiction. What can readers expect?

No kings and queens or other royals as main characters, for a start! Fictionalised stories based around factual events, many well-known such as the French Revolution and the Bubonic Plague, but also lesser-known scandals such child migration, which is portrayed in The Lost Blackbird.

I usually have the next story in mind as I’m about to publish the previous one. Generally only a very vague idea, or even just one line, but something is always cooking on the back burner! The time between writing projects varies according to my paid-job workload and how I’m feeling. Unfortunately, I’ve had a lot of medical issues to deal with over the past five years, which has forced me to stop writing for long periods at a time.

Q: With my own fiction, it’s often the parts in a story that are based on truth that the reader challenges as being ‘unrealistic’. Why do you think that is?

Oh yes, I’ve found that too! I think it boils down to “truth is stranger than fiction”. In my first novel, Spirit of Lost Angels, I included a scene where the inmates of an 18th century asylum are invited to a ball held on the asylum premises. It was called Le Bal des Folles and actually did occur, albeit some years later. Several readers questioned the authenticity of this. In my new release, The Lost Blackbird, I dampened down some of the abuse scenes as I felt the truth was too unbelievable, and too shocking.

Q: I greatly enjoyed your French historical fiction, the Bone Angel series, but more recently you’ve chosen to focus on far more recent history. I wonder if you’ve found, as I have, that writing about events that have taken place within the span of your own lifetime are all the more poignant, particularly if you were blissfully unaware of them.

Yes, I do find these events more poignant I think, as I can more readily relate to them. People are still alive who experienced them, and can give first-hand testimonies.

Q: The Swooping Magpie cast a light on the real-life scandal of young unmarried mothers in Australia who were coerced into giving up their babies for adoption, a practice that continued until the 1970s. With The Lost Blackbird, you tackle the Child Migrant scandal, which resulted in 130,000 children being shipped abroad between the 1920s and the 1970s, with the promise of a better life. How and when did you first become aware of these issues, and how did you go about researching them?

I first became aware of this scandal at least five years ago, when watching the film Oranges and Sunshine and reading the book of the same title. Also entitled Empty Cradles. I found this issue tragic and incredible, but also very interesting. How could such a thing have happened? And how could it have gone on for so long? I was keen to know more about it. And, since this is such recent history, there is a lot of information available on the internet, as well as memoirs published by former child migrants. The Child Migrants Trust was also very helpful with information, as was a former child migrant.

Q: In both cases, the governments have issued public apologies to victims. Do you see these steps as a helpful part of the healing process or do you think it is a question of being seen to do the right thing?

Since I haven’t suffered personally, I can’t truly say if these public apologies really have helped in the healing process. However, from talking to people who did experience these events, they claimed that yes, the public apology did help. I do think, however, it was more of the governments being seen to do the right thing.

Q: As I did with my own recent novel, I found myself comparing your characters’ lives to those of The Five in Hallie Rubenhold’s excellent portraits of Jack the Ripper’s victims. Your characters are also flawed, show bad judgment and make poor decisions, falling between the cracks in society to the point where they are vulnerable to exploitation. I think we can all imagine that we’re only one piece of bad luck away from being in the victim’s shoes.

Yes that’s so true. As my other central character in The Lost Blackbird comes to realise: it could easily have been her subject to slavery and abuse, instead of her sister. Just down to luck, the roll of a dice.

Liza is the author of the French historical The Bone Angel series:

Three French village midwife-healers. Three stories spanning six hundred years. Three women linked by an ancient bone talisman and bonded by living through turbulent times: the Black Death, the French Revolution, the WWII Nazi Occupation. Each brings its own threats and dangers, in this boxset of historical novels based on real events.

Each book can be read as a standalone.

The first book in Liza’s Australian series, The Silent Kookaburra is a domestic noir, psychological suspense set in 1970s Australia. The second in the series, The Swooping Magpie is currently under revision.

Sign up for new book releases and receive a FREE copy of Friends & Other Strangers, Liza’s award-winning collection of Australian short stories.