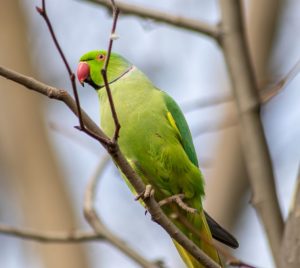 No eden, small or large, would be complete without birds. Several species feature in Small Eden. First, we have the songbirds in the hedgerows and the pleasure gardens. There’s Hettie’s grey African parrot Fairfax (a personality in his own right). And then we have the green ring-necked parakeets Robert buys for his pleasure garden.

I live close to Beddington Park, once a hunting ground of royals and nobles and now home to one of the UK’s largest flocks of green ring-necked parakeets. Easily identifiable, the birds have long, narrow tails and powerful bright red beaks. Males (although, confusingly, not all males) have a thin black and pink collar around their throats. Opportunists and scavengers, they noisily make their presence known. (Listen to their call here.) While they prefer to feast on fruit, nuts and seeds, they have also been seen feeding on blossoms and tree bark. Ring-necked parakeets often make use of nest holes abandoned by woodpeckers. Their breeding season starts before some of Britain’s native species return from wintering grounds, enabling them to secure the best nesting sites. Of our native species affected by their presence, nuthatches appear to be faring the worst. But the parakeets’ success isn’t all bad news. They provide smaller birds with protection against predation. Crows, starlings and jackdaws are all intimidated by parakeets. And, according to the Natural History Museum, they are London peregrines’ second favourite meal (pigeons still top that list).

Originally brought to the Britain’s shores for sale as exotic pets, green ring-necked parakeets are our only naturalised parrot. In 2013 an estimated 8600 breeding pairs were living in the wild. Since then, the figure may well have doubled. Although their primary domain is London and its surrounds, the species has been recorded in almost every county in England, and has reached parts of Wales and Scotland. How these tropical birds have come to populate London and Surrey in such great numbers has been the source of much speculation and has given rise to several urban myths.

According to some, London’s green ring-necked parakeets arrived in 1951 when Humphrey Bogart and Katharine Hepburn were filming The African Queen at Shepperton Studios. Apparently, a number of parakeets recruited as extras for the film escaped from the set. Certainly, parakeets in their dozens can be seen feasting at garden feeders by the side of the Thames. There are, however, a couple of snags. Although The African Queen was a London-based production, it was actually filmed at Worton Hall Studios in Isleworth (with a surprising number of scenes being shot on location in Africa). Also, no parakeets. Not a single one.

Others say that Jimi Hendrix strolled down Carnaby Street in 1968 with a birdcage in hand, and released two bright green birds he had named Adam and Eve as a symbol of peace. (By the sixties, birds were more popular pets than cats and dogs in the UK, with 11 million being kept in captivity.)

It has been suggested that birds escaped from an aviary at Syon Park when it was damaged in the 1970s by debris falling from an aircraft, or, even more dramatically, when a plane crashed through the aviary, depending on your source. You’d think that it would be possible to find records about a plane crashing through the roof of an aviary at Syon Park. Good luck with that.

More recently, stories have emerged that a pair escaped during a row between George Michael and Boy George who shared a flat in Brockley in the 1980s. Or that burglars broke into George Michael’s Hampstead home in the 1990s and raided his aviary. Whichever it was, it definitely had something to do with George Michael.

As much as we’d like these theories to be true, the application of geographic profiling – a technique originally developed in criminology, but now applied to ecology and conservation biology – has disproved them. The technique involves mapping the locations referred to in the theories and applying the model to biological data – in this case, DNA taken from the UK’s parakeet population. This revealed no links. Instead, studies into the birds’ establishment in Britain have concluded the reason they are so populous is likely to be a consequence of repeated releases and introductions.

Victorians kept parakeets as pets and there were sightings of wild parakeets as early as the 1800s. According to the Essex Herald, in 1886 a breeding pair with five offspring were living ‘on familiar terms’ with sparrows in the trees of Lincoln’s Inn Fields.

In 1932, the Middlesex County Times reported that parakeets had been spotted in Epping Forest and Loughton Cemetery. The newspaper credited the ‘parrot disease scare’ of 1931 for an increase in the deliberate release of pet birds into the wild. (Psittacosis is a respiratory disease that can jump from birds to people and can result in pneumonia.) In 1932 the Ministry of Health introduced a ban on the import of parakeets after The Londonderry Sentinel published an article about the death of a parakeet-owner. The ban remained in force for two decades. With headlines urged the public to keep away from dangerous birds, wouldn’t it be more humane to release them than to kill them? Further parrot flu scares re-emerged in the early 1950s after a Birmingham man died, and domestic poultry and ducks were found to be infected, leading to a further ban on imports.

After a trickle of sightings, the UK’s parakeet population grew rapidly between 1986 and 1999. According to The Journal of Zoology, the most plausible origin story is that their numbers shot up after birds escaped from various aviaries that were damaged in the Great Storm of 1987 (the same storm that I wrote about in These Fragile Things).

Today, green ring-necked parakeets and are firmly established as far north as Glasgow’s Victoria Park (said to be the most northerly flock of parrots in the world.) It looks as if they are here to stay. It amused me to add to their story.

In the early mornings, too, the gardens are his. There’s a magic to the place before the gates are opened and in troop tennis players swinging their racquets, high-spirited children with their hoops, ladies from the big villas who’ve come to take their exercise, the watercress sellers spruced up in their Sunday best. Only one person increases the magic. She arrives with the dawn, smelling of rosewater and turpentine, a heavy shawl draped around her shoulders, a tartan rug over her knees. He takes the handlebars of her chariot, waves Oswald off, asks, “Are you ready?” and her eyes shine their answer. Off they set. It is the hour when cobwebs glitter, when petals are jewelled and the grass is fragrant. Though Gerrard pushes her, there is never any doubt who’s in charge. “This way, Master Reynolds!” she commands.

Chin low, he puts his full weight behind the task – he’s had plenty of practice mowing the lawn. Even so, the gravel offers resistance. It takes time to build up to a run. Speed is a way for her to feel in the places where feeling has gone. Once momentum carries them, it’s as if he’s racing to keep up. She whoops in a way his mother calls unseemly, but really, what is that? One of those words which sounds as if it knows what it’s talking about, but when you break it down, it means next to nothing. And who is here to take notice?

She pays attention, wants to know everything. She sees not only what’s there, but what’s been removed, and what might be there if you had a mind to make alterations.

He calls them her gardens – but for her they wouldn’t be as they are – and she calls them his, in honour of the generations of Reynolds who laboured here. In stolen hours, they share this feeling of illicit ownership, but they are never completely alone. Birds open their beaks in a crescendo. First the blackbirds, then the robins, the wrens, chaffinches, warblers and thrushes, and finally the late risers – the finches. Later, after the ground has been warmed by the sun, the hum and the buzz of insects will begin, bumblebees and beetles walking drunkenly over blades of grass. But for now, songbirds flit from high perches or flurry from small hollows. They risk revealing themselves for a meal of scattered seed. Emboldened, the small brown wren watches the cosseted parakeets in the way a person might gawp at caged monkeys. Miss Hoddy holds her hand to the wire mesh. “Fairfax takes sunflower seeds from my mouth,” she dares them.

Sometimes they nibble timidly, but the robin is happy to sit on her wrist and eat from the palm of her hand.

Gerrard wishes he could take her inside the aviary, so she could join him at the centre of the whirlwind, but in the time it would take to lift the wheels of her chariot over the metal lip, the parakeets would make their escape. Part of him thinks of how magnificent it would be to see them streak across the sky.

Instead he tells her that the warbler may have met a parakeet before. That it mimics other birds, showing off about where it’s been over the winter. “All the way to India,” he says.

“When I was a girl, nothing was known about migration. We were taught that birds hibernated. The parakeets – have they laid any eggs?” Like his, her curiosity is greedy. Her eyes gleam with it.

“Quite a few.” He repeats the phrase Mr Cooke used: “They’re enthusiastic breeders.”

She laughs loudly, then covers her mouth in a way that makes him laugh too.

“Nothing.” But when she removes her hand, she laughs some more. “What happens to the chicks?”

All of sudden, her eyes are serious. “Whyever not?”

“We take the eggs away.”

“Oh.” She falls silent in a way that compels him to explain.

“Too many birds competing for the same space, and they start to squabble. That’s what happened with number twelve.”

“He squabbled with the others?”

“Not him, he’s too timid by half. The others pulled out his tail feathers. Plucked them straight from his body.”

She makes a small noise in the back of her throat, as if she is not surprised. “I know people who would do such things,” she says.