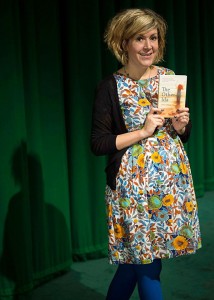 I’m delighted that Amy Mason has agreed to appear on my blog. She is thirty-two, currently lives in Oxford and her debut novel The Other Ida has just won the 2014 Dundee International Book Prize. This year’s biggest prize for unpublished authors, it came with a modest pot of gold and a contract for publication with Cargo Publishing (UK).

Helen Sedgwick, Joint Managing Director of Cargo, said, “Amy Mason has a unique voice, and in The Other Ida she has created a cast of vivid, surprising characters and a story unlike any other. We are thrilled that the Dundee International Book Prize has again discovered a writer of such talent and skill.”

One thing that Cargo and Amy already had in common was a strong association with Edinburgh. Cargo have links with the Edinburgh Book Festival, and Amy’s performed her autobiographical show The Islanders at the Edinburgh Fringe Festival, where it won the 2013 Ideas Tap/Underbelly Edinburgh Fringe Fund, received 5 and 4 star reviews, and was a ‘must see’ show in The Stage. The illustrated script was published by Nasty Little Press. She is currently working on a new show about her relationship with faith. Amy left school at sixteen and has had more jobs than she can count. An evening class – which she took aged 25 – was where she started to write.

Firstly, huge congratulations on winning the Dundee International Book Prize. I imagine you’re still pinching yourself. Tell us, how, when and where did you hear about the competition?

Through Twitter (as I seem to hear about most things these days!). Think it was late last year? I entered and then forgot all about it.

Q: And what were the entry requirements?

You needed to send a full manuscript and a synopsis. There was no entry fee which was definitely an attraction!

Q: You say that you have no expectations when entering. What was your main motivation for submitting your book?

I had finished my book and wasn’t sure what to do with it. Agents had shown interest but needed me to make changes and I was just so tired of it at that point! I think I needed more of a solid commitment before spending yet more time on it, which is what winning the competition gave me.

Q: Had you previously followed the traditional route to publication? Did you already have an agent, for example?

Nope, no agent. I had only really spoken to one properly before giving up on that route (temporarily…sure I would have pursued it down the line). That agent actually approached me after coming to one of my shows (I also make spoken word/theatre). It’s definitely worth getting your writing out there in whatever way you can. 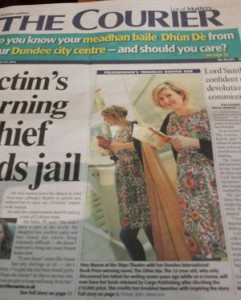 Q: How many stages of the competition were there?

Think there were a few behind the scenes, but I only knew when I was one of a shortlist of ten, and then a finalist.

Q: Describe the moment when you found out that you had won.

I was rehearsing for my new show Mass in Camden. There was no reception downstairs so I kept running upstairs to see if I had any missed calls. When she called she said ‘I have some good news…’ and I thought she was going to say ‘…the judges liked it a lot but unfortunately it didn’t win.’ When she said I’d won I made her repeat it over and over again and cried. It was all very X Factor.

Q: The panel of judges included Neil Gaiman. How does it feel to know that such a high profile author has read your book?

I wasn’t sure he’d like my book at all! He actually judged me at Literary Death Match in Edinburgh (which I won! I got a medal!) and he said I was like Pam Ayres. Ha! I also knew there were lots of problems with the manuscript, so it made me cringe a bit to think of these amazing judges reading it… I just wanted them to see enough promise to give me a chance to fix them.

Q: The Other Ida is about people who lose fame and the pressures of living in the shadow of that. Now that you have won the competition, do you rather feel that you may have tempted fate? (An awful lot of what I write seems to come true in my own life.)

To be totally honest I don’t think this competition is going to bring me fame or that there’s any fate to tempt. It’s a lovely thing to happen, and if I hadn’t won it’s likely that this book would have stayed in a (metaphorical) drawer, so getting it published it brilliant, but my expectations are pretty low and it’s all a bonus. Every time someone says they have read it and liked it I am absolutely delighted, especially when they’re authors I admire…Viv Groskop, Kerry Hudson and Elisa Seagrave were recent mega highlights.

Q: How involved were you in the process between submission of the manuscript and book production? Did you have any input on the cover design, for example?

The benefit of being with a small publisher is that I had an enormous amount of input, although Cargo were ace with the cover design so there was very little I wanted to change.

Q: What does winning the competition mean to you?

It’s lovely that the book found a home, and to have another string to my bow, and when people say ‘are you published?’ I can say ‘YES’!

Q: You are quoted as saying that you were ‘saved by writing’ but that you had no intention of writing a second novel. I know that has changed. So what happened?

Writing a novel is really, really hard. It’s boring and long and often thankless! You’d have to be mad to write another one wouldn’t you? I think it’s like childbirth though… you kind of forget. Also, these new characters have popped up in my head and I need to write them down…

Q: This isn’t the first award you have won. You were awarded the Ideas Tap Underbelly Award for The Islanders, which you write and performed at the Edinburgh Festival (something that, for most people, would be a fairly terrifying prospect). How do the two awards compare?

The Ideas Tap money was brilliant because it funded us to go to Edinburgh and meant that a lot more attention was paid to the show than it would have received without being associated with the award. Going to Edinburgh was such a cool and unexpected thing to happen. I suppose that award was more about funding though really, this one is more of a validation.

Q: The Islanders was based on personal experience. And the novel..?

In many ways, yes. It’s set in my home town, and I was a nightmare in my twenties, but that’s about it, consciously at least. I think novels are a bit like dreams though, they come from somewhere in your subconscious and must mean something. 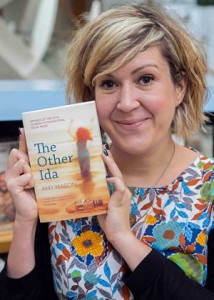 Q: How does the discipline of writing a play differ from writing a novel?

They’re similar but writing shows is much, much easier. They’re ten times as short, and as my shows are autobiographical they take a lot less time to write.

Q: Did your early exposure to theatre add to your love of literature? (Amy’s Grandpa was the actor Lionel Jeffries who was in Chitty Chitty Bang Bang and directed The Railway Children, and her Grandmother won a scholarship to RADA)[BTW, you have so beaten my mother playing recorder on the Finger of Fudge advert and my uncles playing on Fool on the Hill and the Star Wars theme music in terms of credentials.]

Q: How important do you think competitions like the Dundee International Book Prize are to authors and to the publishing industry in general?

I think the Dundee Prize has the potential to be really great for authors. It’s built up over ten years, and I think its association with an indie publisher like Cargo mean that authors are getting a realistic and hopefully (touch wood) sustainable entry into the industry. The money is absolutely brilliant, and so much more than lots of debut authors get these days. It’s meant I can concentrate on writing for a good few months.

Aside: The eBook containing all shortlisted entries can be downloaded for free from Amazon UK. Paper copies can be obtained from Literary Dundee, 6th Floor, Tower Building, University of Dundee. 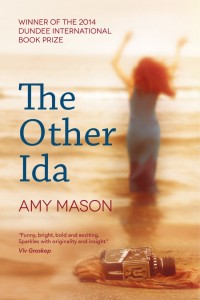 Q: The protagonist in The Other Ida is Ida Irons. What five words best describe her?

Q: You say that you decided to set the book in your hometown. Where is that, and why?

Bournemouth is my home town. I love the sea, but it’s also nice to be able to be rude about the place where you grew up!

I started writing it seven years ago and so much has changed in my life since then. I started off being quite like Ida, and now looking at her, she seems like such a nightmare! The process of writing this book has also taught me so much about writing, and I’m hoping it won’t take me so long to write the next one.

You can find out more about Amy on her website

To read my review of The Other Ida click here