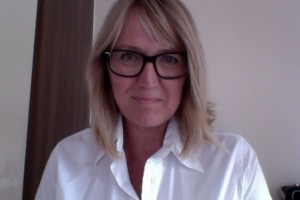 Today, I’m delighted to welcome Helena Halme to Virtual Book Club, an interview series in which I put questions to authors about their latest releases. If you’d like to pose a question, you’ll have the opportunity to do so at the end.

Helena grew up in Tampere, central Finland, and moved to the UK at the age of 22 via Stockholm and Helsinki. She spent the first ten years in Britain working as journalist and translator for the BBC, where she was first to report on the Chernobyl disaster and on Swedish Premier Palme’s murder.

Helena now lives in North London with the Englishman, their daughter and an old, stubborn, terrier. She loves Nordic Noir and thinks in another life she might have been a blonde Birgitte Nyborg from Borgen.

Helena has published four novels, The Englishman, Coffee and Vodka, and The Red King of Helsinki. Helena’s latest book, The Navy Wife, is a sequel to her best-selling novel, The Englishman.

Q: Helena, What is it about your novel that you feel makes it particularly suitable for book clubs?

A few years ago, I ran a book club in an independent bookshop, and the books readers most liked and wanted to discuss were the novels that took them somewhere new, or made them learn about a new country – or era. My previous novels have been selected for a few book clubs and I’ve have great feedback from the readers. The Navy Wife takes you into the world of an ex-pat Finn, but also inside the often sexist, and very traditional, world of the Royal Navy of the mid 1980s. And even though The Navy Wife is a sequel to my first novel, The Englishman, it can easily be read as a stand-alone novel.

Q: The protagonist in The Navy Wife is Kaisa. What five words best describe her?

Goodness, I didn’t think this would be so difficult, because I’ve lived with Kaisa for a long time. She is a very complicated young woman, trying to get to terms with her new life in Britain, so defining her with only five adjectives is hard, but here goes:

Q: Being both independent and lonely may seem like quite a paradox, but it’s one I totally understand. 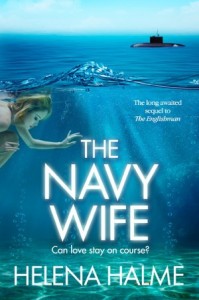 The Navy Wife is set in Portsmouth and Helensburgh in Scotland. When I decided to write a sequel to The Englishman, I knew the settings would have to be one, or several, of the naval bases in the UK. As an ex-navy wife myself, I lived in Portsmouth and Plymouth, but I decided that Kaisa, who had recently left her home in Finland to marry the Englishman, would feel more isolated in a married quarter in Scotland than in Plymouth. The difference both geographically and socially is also starker between the Faslane base near Helensburgh, where the married quarters are away from the main town, and the flat Kaisa and Peter initially have in the centre of Portsmouth. The remote Scottish setting helped to make Kaisa’s sense of displacement and isolation more dramatic. The only difficulty was that I love both of these places, so sometimes it was hard to write the unhappy scenes where Kaisa misses her submariner husband when he’s away at sea.

My readers had asked me for some time if there was going to be a sequel to The Englishman, so even before I’d started writing it, I knew the only title I could consider was The Navy Wife. Kaisa is a new Navy Wife and that is what the book is about. It is what it says on the tin.

Q: Was your novel inspired by any real life events or characters?

Oh, yes! The Englishman is based on my life, and so it follows that the sequel has some elements of my past life as a Navy Wife in it. Having resisted writing a sequel for a long time, I became inspired to write one when I found my old diary from when I first married my English husband and moved to Portsmouth. But the diary was only inspiration, and very little of it survived to the final copy. When you start to write a novel, something happens and the characters start to have life of their own, and this is exactly what happened with Kaisa and Peter in both The Englishman and The Navy Wife.

Both Kaisa and Peter’s characters are based on myself and my husband, and there are a few friends who I’ve sort of used in the book (sorry – never befriend an author), but they are very different to the real life characters. Even though I’ve written these books myself, I struggle to understand what happens in the process; your characters just begin to change, they develop as you write, so in the end I would say that Kaisa, for example, is a lot feistier than me. She has a moral compass, which is a lot sharper than mine, and her political principles are sometimes a bit scary! My husband, the long-suffering Englishman, hardly recognises himself in Peter, and I’m glad, because I get very frustrated with him (Peter).

There’s quite a lot of sex in the book, and I always struggle with those scenes. They are the one part of the book, which get cut the most. I believe that less is more, and this is why I think it’s so difficult to write these scenes. One bedroom scene, which I cut out completely, is the pinnacle of the book, and I had several lengthy discussions with my editor about whether I should describe it in ‘real time’ but I decided to cut it in the end. In case of spoilers, I can’t say anymore, but I hope it works!

Q: We already know that The Navy Wife is a sequel, but where does it fit in with the rest of your work?

Whilst writing it, I got inspired to start a third book in the series. This one will be called, A Marriage Adrift, and follows Kaisa and Peter as they try to rebuild their lives. I’ve also started to write a prequel, called The Finnish Girl, where we meet Kaisa in Finland before she fell in love with her Englishman. This novella will be published, chapter a week, on my blog, www.helenahalme.com soon. I’m really enjoying writing both new books, especially the novella which takes me back to my beloved Helsinki.

Doris Lessing said that moving from one country to another at a tender age made her into an author. There is also a theory that if something dramatic happens to you when you are around 10-12 years old, you’ll be more creative. I do believe that the outside world has an effect on our creativity, and particularly difficulties that we have faced when young often crop up. I guess the human mind tries to process these difficulties and as a result produces art, in my case fiction. I moved away from a small town in Finland to Sweden when I was 11, and a year later my parents separated. Both of those events had a profound effect on my life, and still do. My first novel, Coffee and Vodka, could be seen as the artistic result of those dramatic events. This novel is not biographical; still it helped me make sense of that time in my life.  I also have a formal qualification; I took a MA in Creative Writing some ten years ago at Bath Spa University.

Q: Can you remember where you saw your first book on the shelves and how that made you feel?

I do! It was in Daunts, Hampstead in London. The Englishman was in the Nordic books section next to one of my all-time heroes, the Finnish creator of the Moomin Trolls and author, Tove Jansson. I was absolutely over the moon, and cannot wait to deliver the paperback copy of The Navy Wife to the same shop this coming February. 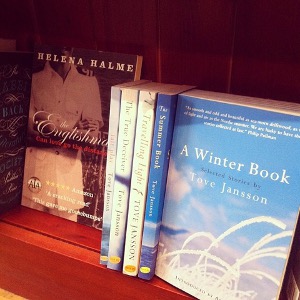 Want to find out more about Helena and her writing?

If you are a Goodreads memebr, she will be hosting a giveaway from 25th January, so do take advantage and enter for a chance to win.

If your book club is in Greater London, Helena would be happy to visit, but if this isn’t possible she will happily join your meeting by Skype.