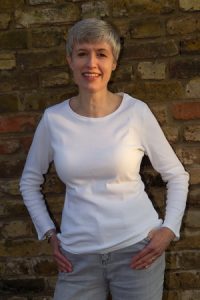 Today, I’m delighted to welcome Helen Barbour to Virtual Book Club, an interview series in which I put questions to authors about the books they’d like to persuade your club to read. If you want to pose a question of your own, you’ll have the opportunity to do so at the end.

Helen was born and brought up in Lichfield, Staffordshire, and now lives in North London.

She began her working life as a journalist on the Express & Star evening newspaper in Wolverhampton, and has written for the lifestyle magazine, Complete Wellbeing, and for the mental health charities Mind and OCD Action. She blogs as The Reluctant Perfectionist about living with obsessive‑compulsive disorder (OCD), perfectionism and anxiety.

Helen enjoys red wine, live stand-up comedy and adventurous travel and experiences, which have included trips to the Arctic, ballooning and a tandem skydive. Her life’s ambition is to figure out what ‘good enough’ means.

The A to Z of Normal is Helen’s first novel. It has just been awarded a coveted B.R.A.G. medallion for quality.

Helen, perhaps you’d start by telling us how you came to be a writer.

When I left university, I had no idea which career to pursue; I felt as if any decision I made would be a shot in the dark. However, my (then) boyfriend was a trainee journalist and once I’d found out what that job entailed, I decided to follow suit.

When I subsequently got engaged, I moved to London and left that career…only to separate from my husband three years later and find myself – in my early thirties – trying to rebuild my social life. So I joined a creative writing evening class at my local college and that was where I discovered my real passion. It was something of an epiphany, as I’d never found my true vocation till then.

What was your first recognition/success as a writer?

My first success was in December 1995, when I won a Christmas short story competition run by a local newspaper. My entry was a twist-in-the-tale story, called A Different View – the twist being that it was told from a cat’s viewpoint.

Have you had any rejections that have inspired or motivated you?

While submitting my novel to agents, two asked to see the whole manuscript and their positive feedback provided reassurance not only that I could write, but also that I had a story worth developing. One explained, ‘I just know how difficult the market is now for first novels’ – a case of ‘it’s not you, it’s them [publishers]’! 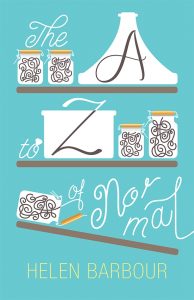 You say that you write in genre of Mark Haddon. What do you mean by this and what can readers expect?

I particularly enjoyed Mark Haddon’s book, A Spot of Bother, in which the central character suffers a mental breakdown. I write in a similar vein – tackling serious topics, but in an accessible way, with a light touch and some humour.

Was your novel inspired by real life events or experience?

The A to Z of Normal is based on my own experience of mental health issues. I suffer from OCD disorder, perfectionism and anxiety and I’ve given my protagonist, Clare, the same problems.

There is still so much stigma around mental health that I felt this should be at the heart of my first major fictional work, in order to raise awareness and increase understanding. My aim is not only to entertain readers, but also to inform them.

What is it about your novel that you feel makes it particularly suitable for book clubs?

Mental health is currently a hot topic and something that is getting increasing media coverage, which is fantastic: the more we talk about it, the better. It’s also receiving a lot of political attention: Norman Lamb MP, whose son suffers from OCD, is leading on The Equality for Mental Health campaign, which has already had some success, with the promise of increased government funding.

The story focuses on Clare’s struggle to overcome her obsessive‑compulsive behaviour, so that she can marry Tom, the man she loves, but she also has to contend with some difficult family circumstances. There’s a lot for readers to explore, including the effects of bereavement and how we manage family and personal relationships.

What point of view do you find most to your liking: first person or third person? (And why)

For this novel, I knew right from the outset that it had to be told from the first person viewpoint. Readers need to be right inside Clare’s head, feeling her anxiety and stress.

Unfortunately, what I didn’t realise until I’d finished the first draft, was that it should also be in the present tense: the past was just too remote. Most of my second draft work was changing the verb tenses, which is actually harder than you might think. 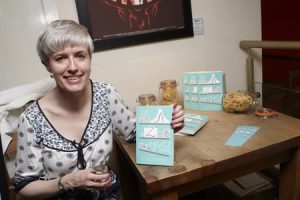 At what point in writing the book did you come up with its title?

I developed the title very early on; I felt I needed to, in order to be clear about my core theme.

As with everything, I took a very organised approach to this. I drew up a table with column headings of ‘adjective’, ‘noun’ and ‘verb’, brainstormed connected words, and then combined these to brainstorm titles.

From that initial list, I created a shortlist and then checked those titles online for any that had been used before. Once I’d refined the shortlist, The A to Z of Normal really shone out. As soon as I’d settled on that, I couldn’t imagine ever calling my novel anything else.

What were the key factors that influenced your decision to become an indie author?

I’d initially been inspired to write my novel when I discovered that a close friend had terminal cancer: that made me reflect on what I would regret not having done if I were in her position.

Having finished my book, I set my sights on publication, spurred on not least by the same friend’s encouragement: ‘Loved it, if that doesn’t get published then something is very wrong with the publishing world…’

However, while agent responses to my submissions were often positive, time after time, I read phrases such as ‘tough publishing climate’, ‘competitive and cut-throat marketplace’ and ‘very crowded marketplace’. In the end, after multiple rejections, I decided life really was too short to wait for somebody else to discover me: the loss of my friend had taught me that.

What do you think the greatest advantage of self-publishing is?

Control, control, control! It’s hard work, even when you use a self-publishing provider who can offer all of the services you need – editing, type-setting, cover design etc – but ultimately, all the key decisions are yours. I have writing friends with traditional publishing deals who were bitterly disappointed when their book’s title was changed, or it came out with a cover they hated, while I couldn’t be happier with my end product.

Is there a phrase or quote about writing that you particularly like?

I love this quote from W Somerset Maughan. ‘There are three rules for writing a novel. Unfortunately, no one knows what they are.’

And this piece of advice, from Ernest Hemingway, is invaluable in terms of editing: ‘Each word should be weighed carefully as for a telegram to be paid for by the writer.’ 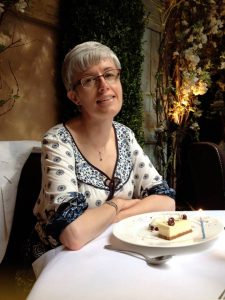 Where can we find out more about you and your work?

You can find out more about my book, and my experiences of living with OCD, on my blog, The Reluctant Perfectionist, and you can follow me on Twitter @HelenTheWriter.

The A to Z of Normal is available worldwide on Amazon as an ebook and paperback – in the UK  and the US  – and as a paperback from BookDepository.com (with free worldwide delivery), wordery.com and my publishers, Silverwood Books. It can also be ordered from all good bookshops.

Finally, I would be happy to visit book clubs in person, where practical – I currently live in North London ­– or by Skype.