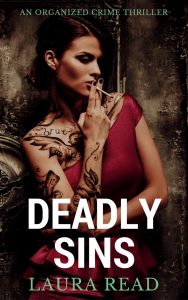 Today I’m delighted to welcome Laura Read to Virtual Book Club, the interview series in which authors have the opportunity to pitch their novels to your book club.

Laura lives in Leicestershire, UK, and has worked in publishing for over seven years, as a designer for a journal and its award-winning website, and now as a freelance designer and writer. She also dabbles in poetry and her poems have been published in two anthologies. In April she published her debut novel, Deadly Sins: a dark thriller about an organised crime family, with a twisted love story at its heart.

Q: Laura, what was your first success as an author?

Finishing my book and hitting ‘publish’ on Amazon was a huge achievement and reading my first five-star review felt like my first success. When I had a couple of days using Amazon’s Free Book Promotion, my book entered the top 100 free books in the Kindle Store and rose to #1 in its sub-categories. I know it’s difficult to achieve success today with only one book, but every copy sold, as well as gaining recognition and feedback from readers, feels like success for me.

Q: What is it about Deadly Sins that you feel makes it particularly suitable for book clubs?

The book is an exploration of the sexism that can permeate families and how sin influences us all. It’s not too long at around 50,000 words and focuses on themes that feature in all of our lives: love, sex, family, trust and escapism.

Hopefully it appeals to readers of a few different genres. I started writing literary fiction, but when my first draft was complete I realised that I’d included too much back story and introspection. I went back and focused on the action and conflicts of the story too, fleshing out the characters more, so now it’s a hybrid of literary and genre fiction. In the process of writing and editing the book (which was a long process!), the characters and themes became darker, and now the novel has a crime noir edge to it, with elements of a psychological thriller and dark romantic suspense.

“How far would you go to escape your sins?”

Q: Can you tell us a little about the central conflict in your novel?

Angela Balanescu is the daughter of an organised crime boss. She hates the violence used by her family and yearns to leave town instead of using drink and sex as escapism. Her main conflict is whether or not she should leave town with Sean, a corrupt detective who she’s fallen for. Can she can learn to trust him? Can she leave her family behind? Her father’s violent lieutenant wants her for himself though, and he reminds her that she shouldn’t trust anyone.

I see Deadly Sins as a commentary on the sexism and violence found in families and society in general, and I want people who read it to think about how they treat others, as well as how they view sex, love and faith. The book features some disturbing scenes where women (and men) are assaulted and murdered – after all, it’s based in the violent world of organised crime – but I hope that readers don’t think that these scenes are senseless or included only for sensationalism. I intended to write a book focused on sin and how my characters’ transgressions ruin their lives – and a crime family has a lot to repent for. 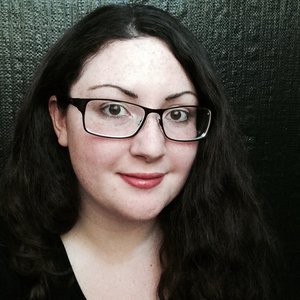 I have a degree in psychology and like finding out what makes people tick. Perhaps because of this, I don’t like predictable and likeable characters because everyone has a dark side and that’s what I enjoy exploring in my work. Also this is why I love watching TV series such as Westworld, Mr Robot, Mad Men and Jessica Jones.

I hate clichés and try to avoid using them, instead preferring to sprinkle unexpected twists and turns throughout to surprise readers. I enjoy following my characters’ development and seeing where their journey ends (I don’t always know what will happen before I start writing), and I hope that my readers will too.

Q: So you didn’t know where this book was going to go right from the start?

The structure of the book kept changing, especially when I wrote my first draft. I started out with a few random scenes from the beginning, middle and end, and I kept switching the order of chapters as I wrote more and more. I struggled figuring out how to combine the various scenes I’d written into some kind of cohesive story and to create an entire book that flowed logically from scene to scene. I think that’s how I ended up spending several years writing and editing Deadly Sins, and I hope that I won’t do this for my next book! I’ve learned a lot from writing my first novel, mainly that planning beforehand is crucial.

Q: What were the major areas you had to research. Were any scenes particularly challenging to write?

Sean is tortured at the beginning of the novel and it was difficult researching and writing this scene, as well as how he copes with his injuries. I had to make the scene realistic but wanted him to feature in subsequent chapters, so this involved researching which injuries would allow him to walk afterwards and would prevent him from ending up in hospital. Also I struggled writing sex scenes and about rape. Sex is very personal and I found it challenging writing sensitively and without clichés.

Q: Was writing the book transformative for you?

Over the years I’ve watched my book transform and I’ve become a better writer. I don’t know how many days/weeks/months/years I spent editing my words as well: cutting scenes and re-writing. I’m a perfectionist, so letting my book ‘go’ and actually publishing it was difficult for me. My writing has changed as I have over the years, and I’ve gained in confidence. I was at university when I first had the idea for this book and since then I’ve got married, bought a house and started my own business: all things that have influenced me in addition to my writing.

Q: Do you think political statements belong in literature? Would you write a novel that was a political tract?

I think most novels deliver a political or moral message. I’ve just started writing a book about a political affair; I’m not sure how much politics will feature overall, but it’ll be interesting to see where the story goes and how I’ll be influenced by the news. 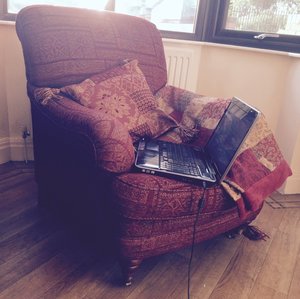 My work as a designer adds a visual element to my writing. I’m more of a visual person, so that’s why I think of my books as a series of scenes initially, as if I’m writing a film script.

I love the freedom and creativity of being a designer and writer (as well as marketing my books and working for myself), and they’re easily interchangeable jobs. There are subtle differences between working on books, magazines and websites though, and I have to be mindful about creating designs for different media and audiences.

I like creating my own book covers, producing lots of different options and whittling down the choices until I’m left with the final version. I enjoy working on covers for other authors too, and being a writer as well as a designer gives me extra insight into what authors want from their covers. For my own marketing, it helps to be able to quickly design images for social media, adverts, emails and my website too.

Q: Joanna Russ wrote, ‘Not only is female experience often considered less broad, less representative, less important, than male experience, but the actual content of works can be distorted according to whether the author is believed to be of one sex or the other.’ Would you like to add to that?

Everyone’s entitled to have their voice heard, regardless of their gender, and this includes in writing and publishing. Once I attended an event in London focusing on various achievements in media, and I couldn’t believe that the vast majority of journalists and publishers in the room were white, middle-class men all dressed in black tuxedos. I’d expected a room full of men and women from across the globe, but there isn’t much diversity even in newsrooms reporting on international events.

Although there are gender imbalances in publishing, it’s encouraging that female writers are doing well with their writing. For example, crime fiction and psychological suspense books penned by female writers are increasing in popularity at the moment, and romance readers are gorging on books written by both women and men.

In a world where sadly we see many far-right campaigners and extremists trying to promote homogeneity, I think embracing and respecting diversity and difference is crucial, and literature should continue to reflect the diversity of human experience.

Q: Where can readers find out more about you and your books?

They can follow me on Twitter or Facebook. For the latest news about my work, and to get special offers on my books and similar novels by other authors (including free books), sign up to my e-newsletter . For a preview of Deadly Sins, go to books2read.com/u/bMGO9v (click on the Kindle icon, which will take you through to the relevant Amazon Store for your country). You can read the book for free in Kindle Unlimited, or on 19-20 June it’s available for 99¢ (US) or 99p (UK) (discounted from $2.99/£2.99).