A Day in the Life: James Conroyd Martin 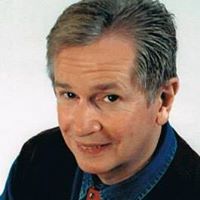 Today, I’m delighted to welcome James Conroyd Martin to my blog. James is the award-winning author of Push Not the River, a novel based on the diary of a countess in 1790’s Poland; Against a Crimson Sky, which continues the family saga into the Napoleonic era; and The Warsaw Conspiracy, detailing the young Polish cadets’ November Rising against the mighty Russia.

Hologram: A Haunting is a Piers Anthony recommended ghost story with a modern twist.

His new release, The Boy Who Wanted Wings is a story of love and war as a young man seeks to become a hussar, one of the elite Polish lancers who wore wings of eagle feathers on their backs. The book culminates with the Battle of Vienna, 1683.

Martin grew up in the Chicago area and taught English and Creative Writing for many years. He now lives in Portland, Oregon.

Q: Who gave you your first encouragement as a writer?

Besides my mother, teachers, and various friends, Science Fiction writer Piers Anthony was the first person in the industry who validated my work. After many rejections, I considered publishing with a print-on demand company and asked Piers if he would read Push Not the River with an eye toward providing a blurb. He agreed, cautioning me several times that he seldom was impressed enough to put his name on another author’s work. When I opened the letter with his response, he had written, “I am profoundly impressed….The twists of the story and politics are interesting, and the finale is compelling….An excellent work.” I was over the moon, as they say. My work suddenly had value.

Q: You generally write in the historical fiction genre. What can readers expect?

They can expect a good story populated with dimensional and passionate characters, set against a historical background that is not only interesting but informative. Stories are a great way to learn history. While I might have just a bit of Eastern European blood, I’ve had many readers of full Polish and Lithuanian descent tell me that they have learned much about their ancestry through my four novels set in Poland.

Q: Regardless of genre, what are the elements that you think make a great novel?

Like a great teacher, a great novel must engage and make the reader think and feel. Yes, it can and probably should inform, but its characters and—to a much lesser degree, plot—must grab hold of the reader and instill empathy for one or more characters.

Q: How do your home and its environment influence your writing?

The question brings to mind my one novel that is not historical fiction. For a number of years I lived in an old Greek Revival mansion in Hammond, Indiana. I knew from the first day—when from another room I heard a disembodied voice cooing over my cat—that the house had its ghosts. I began to study the history of the house and the first family that built it so that as spectral episodes increased, inspiration came. The result was Hologram: A Haunting, a supernatural tale that has the new owners of a house clash with the original owners. 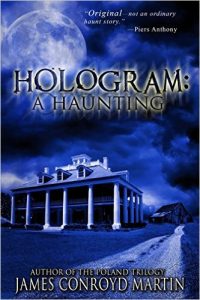 Q: Have you known where your books were going to go right from the start?

Sometimes I might think so, but then the story thread heads in another direction. For instance, when St. Martin’s wanted a sequel to Push Not the River, I exactly outlined Against a Crimson Sky, placing my characters in the maelstrom that was the Napoléonic era. However, as I wrote, the characters rebelled, demanding their freedom and moving in directions I couldn’t have planned. I relented and found the process of a character-driven story rewarding.

Sometimes I know how the story has to end, but not how to get there. I knew how the Battle of Vienna turns out in The Boy Who Wanted Wings. I thought I knew how Aleksy’s two quests would turn out, but the answers to whether he would become a hussar and whether things would work out with Krystyna changed time and again as the story moved toward its conclusion.

Q: Tell us a little about your latest novel. Where is it set and how did you decide on the setting?

By the time I completed The Warsaw Conspiracy, the finale to my Poland Trilogy, I had become intrigued with the country’s history and the Battle of Vienna especially stood out. On September 11-12, 1683, the Ottoman Empire‘s siege of the Christian stronghold was about to succeed, opening up the gateway to the continent of Europe for the forced conversion to Islam. Literally, at the last hour Polish King Jan III Sobieski, at the head of his elite winged hussars, led a multi-national force down the mountains of the Vienna Woods and defeated the Turks. It was the first 9/11 and many believe that the date chosen for the 2001 attack was deliberately symbolic. In any event, my interest in the 1683 battle led to writing The Boy Who Wanted Wings. 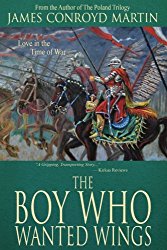 ‘History comes alive in this captivating saga of a desperate war to stave off conquest and extermination. A young man with dreams of greatness is swept up amid the deadly clash, but will he have to sacrifice love itself to become an elite defender of his homeland? The Boy Who Wanted Wings is a powerful, emotionally moving story, highly recommended.’
~Midwest Book Review

Q: What is the central conflict in The Boy Who Wanted Wings?

Aside from the Christian versus Muslim forces that collide at the end of the novel, multiple conflicts arise. Main character Aleksy is a young archer whose greatest quest is to become one of the Polish winged hussars, but because he was born a dark-complexioned Tatar and because he is a peasant, such a dream is unlikely because of culture and class prejudices. When he meets the Countess Krystyna, a nobleman’s daughter, he falls in love but his desire to win her love and her family’s approval—a second quest—proves as unlikely as his achieving hussar status.

Q: Have you incorporated any real life characters into your novels? If so how?

Push Not the River is based on the actual late-eighteenth century countess’ diary that was passed down in the family of a friend, so I remained as true as possible to the woman I found there. And in all of my historical novels, real personages are mixing with my fictional characters, who invariably find themselves in the vortex of historical events.

Q: Joanna Russ wrote that “the actual content of works can be distorted according to whether the author is believed to be of one sex or the other.” Do you wish to comment?

In relation to Push Not the River, I had much to learn when I started working from the diary of an eighteenth century woman. In classes and in writing groups I was often schooled by women on what a woman would think, say, or do. I deliberate long and hard when writing from the woman’s perspective and before final drafts I still ask for advice from the opposite sex.

‘A panoramic and epic novel in the grand romantic style.’

‘Martin’s novel transports the reader 200 years into Poland’s glorious past….Push Not the River sings of a people’s pride…’ Jan Lorys, director of the Polish Museum of America

Illustrating how a couple meet and fall in love is especially difficult. Of course there can be electricity in the first meeting and scene, but I’ve learned to layer the increasing sense of intimacy as a number of scenes play out. The task is further complicated if one or both characters prove resistant.

I’m going much farther back in time, to the sixth century, to write about an Eva Peron-like historical character who has always fascinated me.

Q: Where can we find out more about your writing?

Amazon link to my books:  https://www.amazon.com/James-Conroyd-Martin/e/B001IXNUZ0/ref=dp_byline_cont_ebooks_1