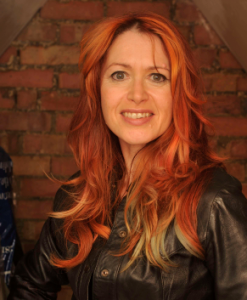 Today, I’m delighted to welcome Roz Morris to Virtual Book Club, my interview series which gives authors the opportunity to pitch their latest publication to your book club.

Roz is an award-nominated novelist (My Memories of a Future Life; Lifeform Three), book doctor to award-winning writers (Roald Dahl Funny Prize 2012), has sold 4 million books as a ghostwriter and teaches writing masterclasses for The Guardian. Not Quite Lost is her first collection of essays.

Some readers discover her through her Nail Your Novel series designed for authors, some via her novels (which have earned her comparisons to Margaret Atwood, Ray Bradbury and Doris Lessing, not to mention a longlisting for an international award alongside Neil Gaiman). I suspect still more will fall in love with Not Quite Lost (if they are lucky, they may receive it for Christmas).  But as one reviewer, clearly familiar with Roz’s writing writes, ‘Whether or not you come to this book with knowledge of Morris’s novels and handbooks for writers, this travel memoir is a quirky and engaging read that will make you pay better attention next time you pass an eccentric old building on the road less travelled.’

Roz, tell me how you came to write Not Quite Lost: Travels Without A Sense of Direction.

I usually write fiction, but last December I made an impulse venture into narrative non-fiction.

It started as a mad idea on holiday. I have a travel diary that’s kept in my suitcase. It’s one of those gilded, leatherbound visitors’ books that you often see in country churches or village museums, where passers-by scrawl ‘lovely, thank you’ and ‘boring, thank you’. For some reason, this book was given to my mother-in-law, and as she isn’t a notebook person she gave it to me. With Lewis-Carroll logic, I decided I would write in it whenever I was a visitor.

So last December, I was with husband Dave (also a writer) on a week’s break in Lincolnshire, and I brought the book out. As we drank our first glass of wine, we looked through it and reminded ourselves of past adventures. The time in Norfolk when the car window got stuck open on the coldest day of the year and we had twenty miles to drive to get it fixed. The time we got stranded in a bleak Shropshire town and couldn’t leave because there were no buses, taxis or trains. The tour guide in Glastonbury who told us he could read minds and had fallen in love with a reincarnation of Nimue.

‘You should put these in a book,’ said Dave.

‘Yeah, they’ll go in a novel sometime,’ I said, and poured more wine.

‘No,’ he said, ‘write them up as a travel essays. People like that kind of thing. Think of Bill Bryson.’

‘Ha ha,’ I said, not taking him seriously at all.

To tell the truth, I thought you had to be a person of note before you could write a book like that. But as the week went on, the idea took hold. I was already creating it in my head. But would it be horribly self-indulgent? When we returned I asked my bluntest author friends. They all said ‘do it’. So did my bookseller friend, Peter Snell. So I did. 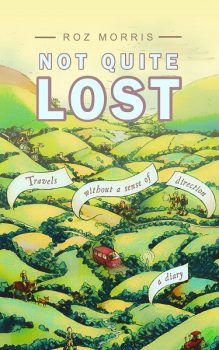 ‘Probably one of the reasons I loved the book is that I share the author’s obsession with old abandoned buildings. Give me a ruin or an empty abandoned house and I want to get inside it.’

‘It’s rare that such a memoir celebrates and explores the quiet, off-the-beat parts of my own country, during the off-season when the glorious British weather (sarcasm alert) makes both travel and sight-seeing less appealing than staying home by the fire.’

‘Both a glimpse into a fascinating mind and a peek behind the curtain of the real world behind the glossy ads and tourism brochures. Not Quite Lost is a marvellous way to explore the sorts of places bypassed by the holiday companies and travel bloggers, which in a way makes them richer places to visit.’

‘A wonderfully funny book – would make a great Christmas present. Quirky, amusing, and tinged with reality. There is no strife like marital strife in a malfunctioning car / under a leaking roof / marooned in a seaside town in November.’

John Green says that writing is a profession for introverts who want to tell you a story but don’t want to make eye contact while doing it. Is that how you see yourself?

How interesting. I certainly recognise that reticence but would I call it introversion? I agree that a writer is an expressive person who is at their best when talking to a blank page. Perhaps that comes from shyness. But perhaps it’s also perfectionism. When we get an idea, that first moment is shimmering with potential. Then we try to express it and disappoint ourselves. So we need lots of time with it – as Clive James would say, ‘turning it in the light’.

John Green’s question becomes even more interesting when the stories you’re telling aren’t fiction and you’re not playing a character. Even if you’re hoping mainly to amuse, it’s a more exposed place – ask any stand-up comic. And when you write a piece that laughs at others you’re usually laughing hardest at yourself.

Some of the pieces in Not Quite Lost are more serious, venturing into personal essay and even memoir. As I was editing the book, a schoolfriend tracked me down on Facebook and introduced herself with the words ‘Hi Roz, I just saw your childhood home has been knocked down’. I simply had to write about it, and it was the most personally searching piece I’d ever written.

So here’s another way to consider John Green’s statement – a writer could be the kind of person who is private in public, but is prepared to peel their skin off on the page. And that’s ironic, because then we put all that bare examination in front of any stranger who buys the book.

John Green mentions eye contact. Sometimes, when you write like this, that eye contact is made with yourself. And there’s nowhere to hide, unlike fiction. With fiction, you might drag readers through the emotional mill. Even if you draw heavily on your own experiences, the reader allows you the distance of invention. There’s a buffer. Nobody need know how much, if any of it, is really you. It’s a secret between you and that page.

But with non-fiction, there’s nowhere to hide. 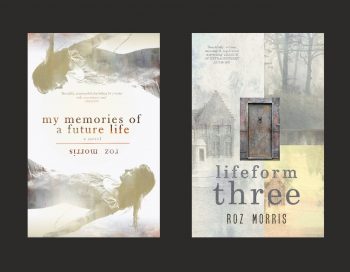 ‘I was seriously impressed by a writer of such skill and confidence. She dances between plausible reality and the shadowy realm of interpretation, underpinned by evident intelligence.’ Jill Marsh, Words With Jam

You generally write in the genre of literary fiction that hovers at the edges of fable and speculative fiction. What can readers expect from Not Quite Lost?

The truth! Real remarkable places, real eccentrics, real oddness. I made a pact with myself that I wouldn’t embellish for the sake of making a better story. Everything had to be true.

But as I trawled back through these diaries, I also found the seeds of my fiction. The landscapes – and to an extent, the people – later emerged in my novels.

For instance, there’s a Downton Abbey-type mansion in Devon that stood derelict for decades and was eventually bulldozed for a modern housing estate, leaving one lone ivy-covered tower. I was captivated by it, and years later, it became one of the foundations for the Westworld-type theme park based around a country house in Lifeform Three.

I discovered I kept writing about south-coast seaside towns out of season – that humdrum, shut-up look they have, and the way the inhabitants seem to think you’ve intruded by visiting when summer is over. I must have been thinking of that when I created the dowdy coastal town in My Memories of a Future Life.

I even saw my main fictional themes emerging from these forgotten writings – buried secrets, lost places that haunt the people who live there now. Even the book title seemed to be my subconscious proving it was wiser than the everyday Roz. I thought of it on a whim and it felt right, but the more I worked on the text, the more it fitted a bigger picture. Not Quite Lost could be my manifesto. It’s like a prequel to my fiction – and I’m sure that more novels will ripen from the stories in its pages. 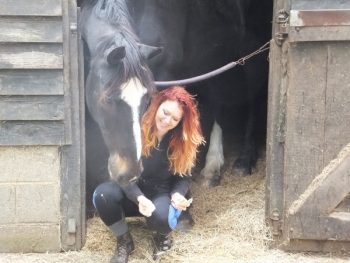 Why the long face?

I never get tired of that joke. You mean my horse, who has the suitably literary name of Byron. He’s developed quite a fan club on Facebook, and I’m pleased to report that he appears in one of the tales, where I encounter a lost, lovestruck teenager in the woods of Dorking.

Want to know more about Roz and her writing? 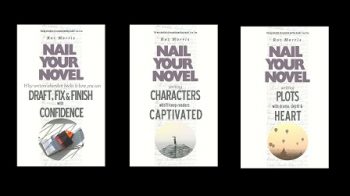 Pssst. For UK readers, my 50th birthday sale is now on. Until 28 October, eBooks are reduced to 99p. (Half-truths and White Lies not included in offer.)